T Vergilio
Ranch Hand
Posts: 238
5
posted 4 years ago
Table 9-10 on page 522, last row, has a space inside the {} in the glob column. There should be no space, unless you want the space to be evaluated as part of the pattern.


Similarly, the code sample on page 428 should reflect that these are languages, not countries, when printing the output.

T Vergilio
Ranch Hand
Posts: 238
5
posted 4 years ago
On page 429, the reason why the output doesn't display the currency symbol for the Locale is because the Locale represents the French language, not the country. If you change the locale to:


the output should be

There is no Currency for the French language:

but there is one for the country:

The API for Currency says:

If no symbol can be determined, the ISO 4217 currency code is returned.


So we should expect to have the code printed if we can't print the symbol:

Here is an example from the ResourceBundle API:

The following class and property files are provided:

The contents of all files are valid (that is, public non-abstract subclasses of ResourceBundle for the ".class" files, syntactically correct ".properties" files). The default locale is Locale("en", "GB").
Calling getBundle with the locale arguments below will instantiate resource bundles as follows:

The first four examples instantiate a mix of ListResourceBundle and PropertyResourceBundle instances for a single getBundle() call.

S King
Greenhorn
Posts: 5
posted 4 years ago
Mock Exam OCP Objective 12.0 Localization question 6: Should rb.getObject("key") rather than rb.getString("key") be used to get values from the Flag.java and Flag_en.java resource bundles? Otherwise there will be a ClassCastException.
My understanding is to use .java for JAVA Resource bundles and .properties for key=value pairs in Property Resource Bundles. Should key=value pairs be located in the JAVA Resource Bundles (.java files)?
Roger Jenkins
Ranch Hand
Posts: 33
posted 4 years ago
On page 272 regarding the StringBuilder reverse() method, the line of code:
StringBuilder s = new StringBuilder("A man a plan a canal Panama");
should be:
StringBuilder sb = new StringBuilder("A man a plan a canal Panama");

otherwise the rest of the code doesn't compile regarding the variable sb.
nick woodward
Ranch Hand
Posts: 383
12
posted 4 years ago
A very minor (and rather pedantic) error (if I've remembered correctly!)

In the OCA part of the book, we discussed several small additions/improvements to the language that were added under the name "Project Coin"

LIES! I'm pretty sure there's been no mention of project coin so far


In the OCA part of the book, we discussed several small additions/improvements to the language that were added under the name "Project Coin"

LIES! I'm pretty sure there's been no mention of project coin so far

It's not an errata item, even not a very minor one. It's probably about interpretation of the statement you have quoted. There is indeed no mention of "Project Coin" in the OCA part. Project Coin was the official name of the project which collected a few small changes for JDK 7. And a few of these small changes (additions/improvements) are definitely covered in the OCA part of the book: strings in switches (page 314), binary literals (page 169), and underscores in numeric literals (page 168); but they are not covered in the OCA part under the name "Project Coin".

Mike Stickles
Greenhorn
Posts: 3
posted 4 years ago
On the interactive quiz CD, in OCP Exam 1, there is a question involving the hashcode/equals contract (sorry, couldn't find it when checking OCP Objective 4 questions directly so I don't know which number it is, and I had the exam running randomized).

The question presents a class "sortOf" with four fields - String name, int bal, String code, and short rate (the fields are all exposed and no relationships between them are enforced by the class) - and with method hashcode() returning:


It then asks which of the four "equals()" implementations shown will fulfill the equals and hashcode contracts for that class. The CD says A and B are wrong and C is correct, and I concur. But the CD also states that D is correct:

with the explanation stating that "The equals() algorithm must be at least as precise in defining what "meaningfully equivalent" means as the hashcode() method is." However, D does not add precision, it simply changes the algorithm. The following example shows that D would not fulfill the contract:

posted 4 years ago
According to the answer to Question 56 of OCP exam 2, the following statement is false: "In an assert statement, the expression after the : (colon) can be any Java expression."
The explanation is that you cannot put a method invocation of a void method after the semicolon. This may be true, but is this really an expression?

I thought an expression returns a value by definition... Because you can put any value after the colon, the statement should be true. Indeed according to the official documentation on expressions https://docs.oracle.com/javase/tutorial/java/nutsandbolts/expressions.html: "An expression is a construct made up of variables, operators, and method invocations, which are constructed according to the syntax of the language, that evaluates to a single value."

Perhaps technically a void method call is an expression just like other method calls? Still, not a well-posed question I suppose.
Henno Vermeulen
Ranch Hand
Posts: 40
2
I like...

posted 4 years ago
OCP mock exam Objective 11 concurrency question 1. Class Account correctly uses a ReentrantLock to protect the value field, but method getValue() doesn't use the lock to read the value field.
Correct me if I'm wrong, but this can suffer from visibility issues due to a thread caching the value.
So I selected answer A which says this class is not thread safe.

The lock should als be used to read the value, or the value field should be volatile.
Mike Petrov
Greenhorn
Posts: 26
I like...

posted 4 years ago
Where:
Chapter 15: JDBC, page 856
Paragraph starting with "First,"
Next to last line

What:
Replace "jdbc.sql.Driver" with "java.sql.Driver"
Mike Petrov
Greenhorn
Posts: 26
I like...

posted 4 years ago
The following suggestions cover exclusively the JDBC chapter.
Most serious ones that affect supposed language behavior are colored in blue.
I encourage someone to check my conclusions for possible mistakes as it would be a source of knowledge for me too.

Where: p. 849 (table column name) and p. 872 (code snippet on top)
Should be:
NOTE: p. 872 has already been added to errata wiki with suggestion to change "UnitPrice" to "Price" in SQL query. My suggestion is the contrary:
1) revert that record in wiki
2) change rs.getFloat("Price"); to rs.getFloat("UnitPrice"); on p. 872
3) change "Read the data in the column "Price" to "Read the data in the column UnitPrice" on p. 872
4) change "Price is the third column" to "UnitPrice is the third column" on p. 872
5) change "and Price is in position 3" to "and UnitPrice is in position 3" on p. 872
6) change column name to "UnitPrice" on p. 849
The reason is that code snippets in this chapter use the data model introduced on p. 847 extensively. After passing through the chapter, I've noted that "UnitPrice" is seen far more often than "Price". Thus moving to "UnitPrice" would involve less effort.
All of the following examples feature "UnitPrice":

Where: p. 874, "getTimestamp" (4th paragraph from the top), third line
What: "where ffffffffff"
Should be: there are 10 f's but should be 9 since there are 9 digits in the maximum number of nanoseconds. Previously declared form "yyyy-mm-dd hh:mm:ss.fffffffff" is correct.

Where: p. 876, last paragraph, sentence beginning on third line
What: "Also, note that each column must be set to a value before the row is inserted in the database or a SQLException will be thrown"
Should be: Only NOT NULL columns should be set to a value. No one requires you to set columns that allow for null values.

Where: p. 876, code snippet, fourth line
What: rs.next();
Should be: this statement should be deleted as it's not necessary to read the RS metadata.

Output:
Before delete, row #1
After delete, row #0
Cursor is before the first row
org.postgresql.util.PSQLException: ResultSet not positioned properly, perhaps you need to call next.

Where: p. 917, last paragraph
What: "...and inserting a row has no effect on the current RowSet data"
Should be: my research shows that inserting a row to RowSet causes it to appear in subsequent reads. Look at the code snippet below.

Output:
Michael
Jack
should not be visible
Dana Ucaed
Ranch Hand
Posts: 459
6
I like...

pag 213 Self test chapter 3, question 4.
Response to the question 4 is wrong.

I ran the code and response is runtime exception - NullPointerException.


E is incorrect because there is no "ride" key once we delete the parent.


E is incorrect because there is no "train" key once we delete the child.

I'm referring to Table 5.7 "Picking a resource bundle for French in France with default locale US English" on page 264 in "Oracle Certified Professional Java SE 8 Programmer II" book.
I think it should not contain rows (steps) 5, 6, 7, 8 (4 extra rows). The lookup for the key in bundle falls through from Zoo_fr directly to Zoo (default non-localized bundle) rather than searching through bundle set as default (and its parents) before that.

I created some test to run and the code which confirms this behavior is here:
https://github.com/uvsmtid/incubator/blob/403df7c18a8574ee0935d66bbe3eaa1c61e4b8f5/java.works/e416.internalization/bundle-value-resolution/src/main/java/com/spectlog/App.java#L59-L68
* It confirms the key (default_only_us) which is supposed to be available only in default locale is actually there.
* It prints default locale (en_US).
* It looks up for the key available in default locale only (default_only_us).
The last step throws MissingResourceException which confirms that bundle for default profile is not in the chain.
I went through the source code under debugger and dynamic structure (parents chain) of the ResourceBundle objects simply does not contain bundle for default locale (en_US).

posted 3 years ago
The table on page 460 is incorrect because of this. 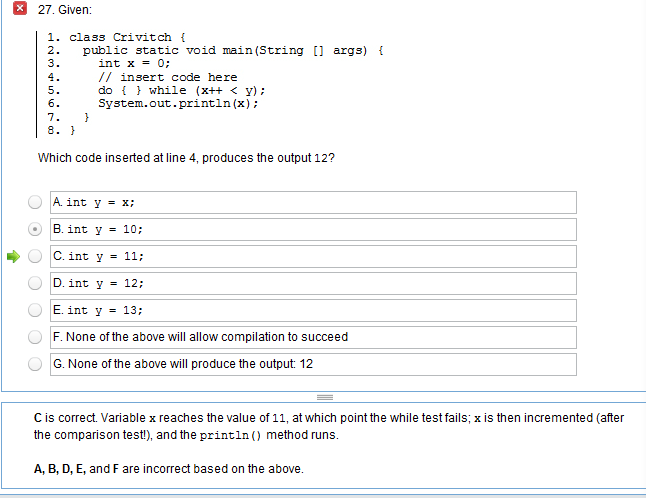 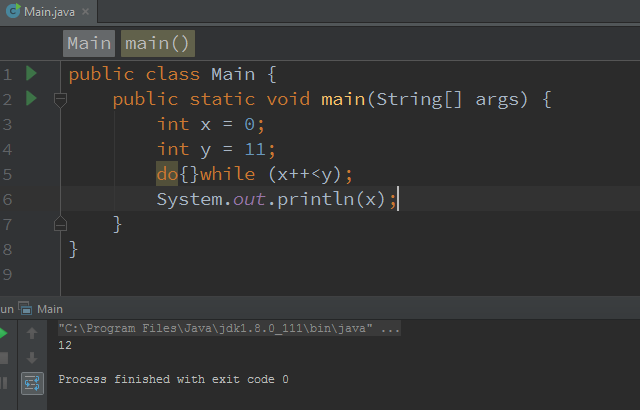 posted 3 years ago
In page no.804, LinkedTransferQueue is unbounded queue, so add,put and offer will not be blocked . In the example code ,its specified that it will get blocked

If it's still in your mind, It is worth taking the risk !!

Since the method returns a reference to the Date object and this reference is assigned to a local variable, it will not be eligible for collection even after the getDate() method has completed.

E Byrne wrote:Greetings CodeRanchers - first time poster, so I may not be doing things properly


Oops – re my above post: I completely misread the code and there is no issue!

Could a moderator remove my post, if possible, please? (Looking to see if users can edit posts themselves, it seems that maybe this is no longer allowed?)

Sorry for the inconvenience.

otherwise the rest of the code doesn't compile regarding the variable sb.

Has this been reviewed for addition to the errata page? The publisher has received a second report of the issue.