This thread is open for hijacking

Lalooprasad Yadav
Ranch Hand
Posts: 92
posted 18 years ago
I wonder what caused the sudden demise of this thread.
http://www.javaranch.com/cgi-bin/ubb/ultimatebb.cgi?ubb=get_topic&f=32&t=001781
12 posts by different people were ruthlessly massacred. Everybody including the Sheriffs and the Bartenders seemed to be enjoying themselves. I wonder what happened after that. Didn't things quite work out the way it was expected ? Or did someone suddenly wake up and realise who was being had

Lalooprasad Yadav
Ranch Hand
Posts: 92
posted 18 years ago
May I hijack my own thread ?

posted 18 years ago
I'm sorry that was just way too long to read. I got confused after the first sentence. Maybe I just need some more IQ pills.
Sorry back to your regularly scheduled programs.
Mark

Thomas Paul
mister krabs
Posts: 13974
posted 18 years ago
I didn't read it either. I think it was about "The Lord of the Rings".

posted 18 years ago
Fundamental danger of the rant: (although I think it was the abuse generator rather than a rant)
Putting your audience to sleep.
I think we need ME to come in and define a rant for us.
Mapraputa Is
Leverager of our synergies

Guys, who asked you to read? You were invited to hijack this thread! Read requirements! :roll:

Lalooprasad Yadav
Ranch Hand
Posts: 92
posted 18 years ago
Something funny going on here. I think it is a plot by Chong & Stevens to retake control of Meaningless Drivel.
David O'Meara
Rancher
Posts: 13459
I like...

posted 18 years ago
While we're on the topic of funny things, I discovered www.montypython.net the other day.
Thomas Paul
mister krabs
Posts: 13974
posted 18 years ago
When my daughter was born, the doctor was listening to a classic music station. Just as my daughter entered the world, the familiar John Philip Sousa march loved by all Monty Python fans erupted from the radio. It was... frightening.

posted 18 years ago
I haven't listened to the radio in ages.
Music used to be very imporant to me and I would always be buying new CDs, but this hasn't been true in a long time.
The nearest I can get to a reason is that I used to do a lot of driving and couldn't drive without the radio on. Since I now bus or ride to work, my car has been sitting out the back for almost 2 years.
I do feel that it is missing in my life, but I can't seem to get the required minimum level to precipitate the passion I once had.
DOM
Aakanksha
Ranch Hand
Posts: 60
posted 18 years ago
Yesterday, I got acceptance sign-off on the project i was working on for last soooooooooo many months...boy am i relieved or what...all those days( and nights) of hardwork and toil finally paid off...though i am not too sure if my PL shares the same point of view.
David O'Meara
Rancher
Posts: 13459
I like...

posted 18 years ago
I don't have any PL/SQL skills.
DOM
Thomas Paul
mister krabs
Posts: 13974
posted 18 years ago
I have always been interested in the history of the Oracle of Delphi. SUNY at Delphi is the college in upstate NY where my sister got her degree. Although animal husbandry was a big major there I think she majored in skiing.

posted 18 years ago
My sister is currently visiting from Sydney. She recently had her second child and I'm looking forward to meeting him.
(this conversation is starting to remind me of those stories where a group of people tell it line by line, but when it comes to your turn you are only allowed to see the previous line...)
Ashley Pratt
Ranch Hand
Posts: 43
posted 18 years ago
javaranch is getting slow

Ashley Pratt
Ranch Hand
Posts: 43
posted 18 years ago
but whatever..i think it is good..
and I like to come here again and again..

Anonymous
Ranch Hand
Posts: 18944
posted 18 years ago
About me? About what I'm looking for in a wife, old age companion? Hmmmmm.....
Too bad I'm not much to look at. Can't find that many girls who like my looks. Maybe there're simply too many girls out there who are too good looking.
Don't have much character either. Don't really know how to talk. Worst still I still haven't went pass the phase of spouting nonsense. Damn, the more nonsensical it is, the more I like it.
Look, you can't blame me for this, I am a schizo depressive person.
In this world, there's a kind of man with no friends, no love. I'm such a person.
My wife/old age companion must know how to cook dishes the way they tasted like that from my mom. She don't have to know them now, but she must make sure she know them in the next 10 yrs. (My mom is in her 70s) She must know how to do house work coz I live alone. If she like talking nonsense, so much the better.

,
is it true that chess is a religion in Russia, and I thought in Russia, there are only two lastname that people can only choose, "Karpov" or "Kasparov".
which one is your's Map ?

Anonymous
Ranch Hand
Posts: 18944
posted 18 years ago
I've left my church's prayer meeting group for 2 weeks already. And I've emailed my priest telling him that I would like to take a break. He was kind enough to email me back, asking me who do I trust, knowing that I am the kind of man with no love and friends.
I didn't know how to answer him. I was struck dumb-founded coz I trust no one that's why I have no friends. But after watching the music video clips of "I was a Ye-Ye girl", I decided that I would like to put my trust in a ye-ye girl. Hmmmmm....what should i be saying next?

Originally posted by Stevie Kaligis:
doesn't sounds like chess champion to me Map

,
is it true that chess is a religion in Russia, and I thought in Russia, there are only two lastname that people can only choose, "Karpov" or "Kasparov".
which one is your's Map ?

I am not a big chess fan. I occasionally visit Yahoo!Game to play chess. Right now, Russian chess is no longer as dominant as before. Chinese women's team has 3-peated both individual and team world champion. On men's side, there is also fierce competition now. Once again, I am not a big chess fan, so I am sure there is more complete information source out there. And another thing I want to point out is: Kasparov is not a Russian, if memory serves, he is a Georgian.
Regarding chess itself, IBM's Deep Blue has beaten Kasparov. But any computer has not been anywhere near to beat the GO world champion. People has agreed that GO is a much more complicated board game than chess. Right now, GO is becoming more and more popular worldwide: Asia, North America, Europe,... but GO is even easier to play than chess. To learn how to play GO, just visit Yahoo!Game.
[ February 10, 2002: Message edited by: Don Liu ]

Originally posted by Don Liu:
And another thing I want to point out is: Kasparov is not a Russian, if memory serves, he is a Georgian.

Well, you are right that he is not Russian. He is half Jew and half Armenian. Karpov is much better, because he *is* Russian.

That's why Communists loved him. Communists were big on internationalism and equality of all nations; Jews were the only exception.
What is cool about a new version of UBB, though, is that my signature cites Lew Trotsky's words before they were said.

"Those who saw Map in a purdah will run forever"

Originally posted by Don Liu:
Right now, Russian chess is no longer as dominant as before.

Only because our national chess ceased to be compliant to what rest of the world think chess is about. 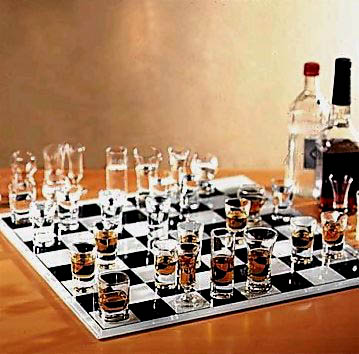 I bet, after finishing the game, they will continue with Russian Rolet

Pounding at a thick stone wall won't move it, sometimes, you need to step back to see the way around.

Stevie Kaligis
Ranch Hand
Posts: 400
posted 18 years ago
I think the way they played the game is just like a regular chess game, the winner will drink all those 32 shot glass of "antigravity water" for free

they used "distilled water" and "black coffee" for rookie player

Posts: 18671
posted 18 years ago
Thread hijacking - yes, it occured to me some time ago that since it was created with the explicit intent of being hijacked, the best way to truly and properly hijack it would be to force it to follow a single topic consistently.

But that seemed like far too much trouble to me :roll: , so I left it alone.
As for the modified chess rules - you Russians should really take up Go. It offers so much more drinking potential.

Posts: 18671
posted 18 years ago
Well, the board is 19 x 19. (Players play on the intersections of the lines, not the centers of the squares. The number of pieces (stones) is not strictly defined - players alternate adding stones to the board until they feel that there is nothing more they can accomplish. The total number of stonesplayed is not limited by the number of positions (361), since stonescan be captured and removed, and afterwards new stones played in the same spots. There are rules to prevent infinite cycles, so the game is ultimately finite, but the number of stones which may be played is theoretically... ummm... extremely large. Well in excess of any human's drinking capacity. Even a Russian.

However this is moot in reality, as both players would have to be intentionally losing as badly as possible to come anywhere close to the theoretical maximum. Practically speaking, experienced players would probably play around 100 stones and lose 5-30 apiece in a game, and novices might play 150 and lose up to 100 or more. Experienced players will not bother to fight out those battles whose outcome they consider to be clear - novices generally want to fight them out to see what happens.

Originally posted by Thomas Paul:
When my daughter was born, the doctor was listening to a classic music station. Just as my daughter entered the world, the familiar John Philip Sousa march loved by all Monty Python fans erupted from the radio. It was... frightening.

When my daughter was born they had "Light my fire" by the doors in the background. very frightening