posted 17 years ago
those weapons can be fired within hours of notice.
Also China has more than 400 long range tactical missiles targeting Taiwan
thats why US should deal with these countries diplomatically ....


Good reason ....
And whatelse I am saying ...
If Iraq had weapons to point Kuwait and nearby 3-4 countries then he would have never been invaded.
But it was first disarmed then he was attacked... poor Saddam.
It was good lesson for other nations.
By the way look at whats happening in Hong Kong recently the ppl there are definitely not happy about whats going on because they dont want to loose their very freedom and liberty.
Let them decide what do they want and how they plan to achieve it.
OR is it necessary to interfere.
Paul Stevens
Ranch Hand
Posts: 2823
posted 17 years ago

also they sell weapons to terrorists regimes for example the Taliban reigme's AK47 are all made in china.
Its "Made in China", but who sold these weapons to them, should I take the name of the country.

Who do you think sold them?

"Thanks to Indian media who has over the period of time swiped out intellectual taste from mass Indian population." - Chetan Parekh

Originally posted by Billy Tsai:
By the way look at whats happening in Hong Kong recently the ppl there are definitely not happy about whats going on because they dont want to loose their very freedom and liberty.

if you realy think what had just happen in Hongkong recently is related to china, then you don't know what you're talking about !
Jason Menard
Sheriff

Originally posted by Billy Tsai:
China and North korea are just as bad as Iraq and in fact probably worse than Iran and Iraq.
The only thing they haven't done yet is invade their neighbouring country but its gonna happen sooner or later because they threatens the neighbouring countries with weapons to try to oppress the freedom and right of ppl.
The world shouldn't put with those communists regimes.

Rufus BugleWeed
Ranch Hand
Posts: 1551
posted 17 years ago
I believe the caterwauling is continuing this week. I see calls for Chenney and Tenet to go.
I have trouble believing that Rice first heard about Wilson's trip to Africa on June 8.
More importantly it looks like Boy George's popularity is plummeting. Do you think it's the economy or Iraq that's pulling him down?
Jason Menard
Sheriff

Posts: 6450
posted 17 years ago
Yes I suppose the lefties figure if they are shrill enough for long enough it might lessen the beating they are likely to take in the next Presidential election.
But let's take a look at the President's "plummeting popularity". According to the latest ABC/Washington Post poll, while down, the President's overall approval rating is still a whopping 59%.

Despite the changes, the public overwhelmingly remains committed to supporting the troops and sticking it out in Iraq. Seventy-two percent say U.S. forces should stay until civil order is restored, even at the cost of continued U.S. casualties. About as many "support the current U.S. military presence" in Iraq. (And about as many also expect "a significant number" of additional casualties to occur.)

The public nonetheless has positive assessments of the war's outcome. Sixty-two percent believe it did contribute to the long-term security of the United States � the fundamental justification for the conflict. And more, 72 percent, think it helped improve the lives of the Iraqi people.

(emphasis is mine as many seem to conveniently forget that point)

Most Americans don't expect a quick resolution in Iraq; asked how long they think U.S. forces will need to stay, 57 percent give answers ranging from "about a year" to a few years; an additional 13 percent say longer than that, or "as long as needed."
Whatever their answer, most, 56 percent, express comfort with the amount of time they expect it to take.

A different view of another recent poll that had similar results.
Newsmax has an interesting take on the current media and liberal feeding frenzy.

As President Bush has been fighting a war against terrorism, the Democrats and the big media are fighting a war against President Bush.
The latest case in point: the non-issue of President Bush�s fleeting reference to intelligence that Iraq was seeking uranium in Niger.
In hindsight, the Bush administration honestly admits the evidence wasn�t strong enough to have made that specific statement. The British disagree, however. They say they have seen the evidence and it�s true.

We knew that Saddam was put at the top of terrorist threat list, not by the Bush administration, but by the Clinton administration.
In 1998, Clinton said Saddam had weapons of mass destruction, was developing still more weapons, and would use them at some point. Nobody in the media accused him of politicizing intelligence data. (Nor did the media accuse him of manipulating data for his �wag the dog� war against Serbia � when, after the war, no evidence of genocidal atrocities was ever found.)
The State Department has had Iraq on its list of rogue nations sponsoring terrorism for years, well before Bush showed up in the White House.
As Notra Trulock notes: �The clearest public expression of the intelligence community�s judgments on Iraqi WMD may be found on the CIA�s Internet Web site. Posted in October 2002, the community judged that Iraq had continued its WMD programs, it had chemical and biological weapons, and �left unchecked,� it would probably have a nuclear weapon in this decade.�

But this media campaign is nothing more than one orchestrated to undermine the president�s popularity and boost Democratic chances for 2004.
So far, the media�s drumbeat is working. The president�s overall approval rating has sagged, and his rating for his handling of Iraq had dropped a precipitous 21 points from April, falling from 74 percent to 53 percent.
The one poll that the public needs to remember is the one taken in 1992. The Roper study found that 89 percent of the Washington press corps said they voted for Bill Clinton, as opposed to 6 percent for the elder Bush.
Clearly, the left-wing media will do anything to elect a Democrat in 2004.

Billy Tsai
Ranch Hand
Posts: 1327
posted 17 years ago
lets not forget President Clinton nearly went to war with North Korea in a tense situation that was even more worse than the current situation, he was about to order the stealth bomber to scramble to bomb the North Korean nuclear bases.
and the current situation is still handled diplomatically not militarialy despite north korean migs harrassing US recon plans and making threats to Australia and USA about nuclear attack, if this was happening back in the clinton administration a war with North Korea probably would have broke out already.
Also under the Clinton Presidency there were 1 war too, the bombing of Iraq the day b4 President Clinton's impeachment vote also several near war situations such as the missile crisis in Taiwan strait when China was conducting massive military exercises and missile drills in 1996 and President Clinton ordered two carrier fleets to Taiwan.
And the north korea thing I metioned above.

So far, the media�s drumbeat is working.

Well, at least something is working because Bush's tax cuts seem only to be making the rich richer.
Have tax incentives been tried in the past to aid business in making durable goods purchases? I think the term I've heard is accelerated depreciation. What about tax breaks for adding new employees?
I see Tenet is going before congress to do a little dog and pony show. Considering it is a GOP Congress and a GOP administration will not this just be a waste of time to preserve the status quo. Condoleezza's head needs to roll.
Thomas Paul
mister krabs
Posts: 13974
posted 17 years ago

Why does this remind me of the Queen of Hearts in "Alice in Wonderland"?

Originally posted by Rufus BugleWeed:
Considering it is a GOP Congress and a GOP administration will not this just be a waste of time to preserve the status quo.

Considering the fact this whole thing has been manufactured into an issue by the liberals, yes, it is a waste of time.
Rufus BugleWeed
Ranch Hand
Posts: 1551
posted 17 years ago
From today's NYT -

According to White House and some intelligence officials, four days after the report was issued and was in the hands of a number of lawmakers, Mr. Tenet called a Bush aide and asked that any reference to allegations that Iraq had sought to obtain 500 metric tons of uranium yellowcake in Niger be removed from a speech President Bush was to give in Cincinnati.
That is a central question Mr. Tenet appears likely to face in the closed session with the Senate select committee on intelligence on Wednesday.
The warning, administration officials said, came in several phone calls to the deputy national security adviser, Stephen J. Hadley.
Mr. Tenet told Mr. Hadley that the C.I.A. was not sure about the credibility of the information.

Tenet seems to be caught agape by the matter. 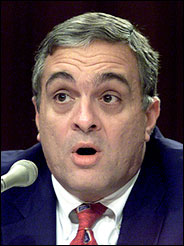 We used to have this idea that GWB was a straight shooter, albiet not as sharp as Bill Clinton. So either Bush is a scam artist or he's being duped by his Phi Beta Kappa, Summa Cum Laude, National Security Advisor. We had no idea! Lordy, mercy me.... When you make a mistake, don't beat on the CIA. Own up to the facts or admit you lied.
She needs to go on a space shuttle flight with Clearance TooMuch ( Clarence Thomas ).
Paul Stevens
Ranch Hand
Posts: 2823
posted 17 years ago
The New York Times. The bastion of truth and impartiality. :roll:
Thomas Paul
mister krabs
Posts: 13974
posted 17 years ago
I just wanted to make the point that the UK still stands by their interpretation of the Niger/Iraq link and insists that they did not rely on the forged documents. In fact, according to at least one source, the UK has evidence they got from French intelligence sources but the French insisted that the information not be given to the US.

Rufus BugleWeed
Ranch Hand
Posts: 1551
posted 17 years ago
Do you like the Washington Post better?
They are pretty much trashing the administration too. Everybody remembers that the State of the Union Address was considered to be a make or break event for Bush. Without WMD Iraq starts to look like it's all about oil, revenge or geopolitical adventure. We want truth not hype from the President.
Condoleezza can get a good paying job at some right wing think tank.

Originally posted by Thomas Paul:
I just wanted to make the point that the UK still stands by their interpretation of the Niger/Iraq link and insists that they did not rely on the forged documents.

That would only matter if this whole thing weren't some kind of desparate political maneuver on the part of the Democrats. I don't think they are particularly interested in facts or what is best for the country, merely what might help them in 2004.
Paul Stevens
Ranch Hand
Posts: 2823
posted 17 years ago

Originally posted by Rufus BugleWeed:
Do you like the Washington Post better?
They are pretty much trashing the administration too. Everybody remembers that the State of the Union Address was considered to be a make or break event for Bush. Without WMD Iraq starts to look like it's all about oil, revenge or geopolitical adventure. We want truth not hype from the President.
Condoleezza can get a good paying job at some right wing think tank.

What is the actual quote from the State of the Union Address? Do you even know?
Here it is in case you have never actually looked at it.
The British government has learned that Saddam Hussein recently sought significant quantities of uranium from Africa.
Read it for yourself.
So someone should be fired for that. As Thomas has pointed out. The British still stand by that statement.