Who will win World Cup Football 2006?

posted 16 years ago
Who will win World Cup Football 2006? What's your prediction?

Like every other time, I am a Brazil fan and wish that Brazil wins.

posted 16 years ago
based on local news it appears Australia is strong chance, but I have always accused them of being biased. :roll:
Ernest Friedman-Hill
author and iconoclast

posted 16 years ago
I will win.

Originally posted by Ernest Friedman-Hill:
I will win.

[My Blog]
All roads lead to JavaRanch

Originally posted by David O'Meara:
based on local news it appears Australia is strong chance, but I have always accused them of being biased. :roll:

I know Australia are good at almost every sport on the planet, but the World Cup? Nah, there's more chance of Peter Crouch winning a Most Graceful Footballer award then Australia winning the World Cup.

My bet is Argentina, but then my guess has been wrong in every single international competition I've ever watched.

There will be glitches in my transition from being a saloon bar sage to a world statesman. - Tony Banks

posted 16 years ago
AT What US Pacific time the opening ceremony will start? Any web site will show highlights of it? I couldn't find it out from http://fifaworldcup.yahoo.com/06/en/w/schedule.html

Do you know of a better blog on World Cup Football 2006 than http://www.worldcupblog.org/ ?

posted 16 years ago
Brazil should win. However Argentina have a strong team (their manager has picked their best team players, rather than their best players). England has a good chance, as do Italy.

- as long as he gets on the end of Beckham�s crosses, and holds the ball up. Of course we could use our well known forward - Theo Walcott, I'm sure you have heard of him, when he player for ???.

madhup narain
Ranch Hand
Posts: 148
posted 16 years ago
I think germany has a good chance but India will

Money for nothing and Java for Free
SCJP, SCWCD

Originally posted by David O'Meara:
based on local news it appears Australia is strong chance, but I have always accused them of being biased. :roll:

I read that Australians were more obsessed with winning the Ashes than the World Cups in cricket,football,hockey etc. Are the local news focussing on the World Cup because the Ashes series is not going on?

Pounding at a thick stone wall won't move it, sometimes, you need to step back to see the way around. 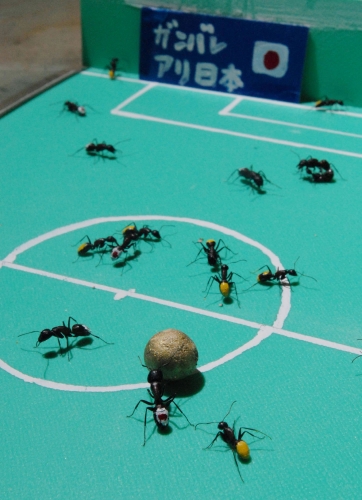 Originally posted by madhup narain:
I think germany has a good chance but India will

Showing arrogance of football eh? India had a dreadful time qualifying for the tournament, they aren't even playing.
Pradeep bhatt
Ranch Hand
Posts: 8944
I like...


Showing arrogance of football eh? India had a dreadful time qualifying for the tournament, they aren't even playing.

Daniel Bauer
Ranch Hand
Posts: 49
posted 16 years ago
I read that if England with the World Cup, their players will each get about $500k - not bad for just playing eight games in four weeks!

I think this will be the best World Cup ever, the last one in Japan & South Korea (2002) was pretty poor (but great stadia) - the quality of the football and the poor referring underminded it. European World Cups (apart from Italia '90 - which was probably the worst in history) are usually good, especially if France '98 is anything to go by.

The most prestigious sporting event in the world - bigger than the Super Bowl with 188 countries and an estimated two thirds of the world population will watch it. The Indians have a very good sense of humour.
Stephenz ittyz
Greenhorn
Posts: 15
posted 16 years ago
Definitely Argentina or France will lift the world cup....

Reza Rav.
Ranch Hand
Posts: 177
posted 16 years ago
Thanks god in this case US is not the monopol, Brazil or Germany winn

The Indians have a very good sense of humour.

The opening ceremony begins in 6 hours in this wonderful stadium: 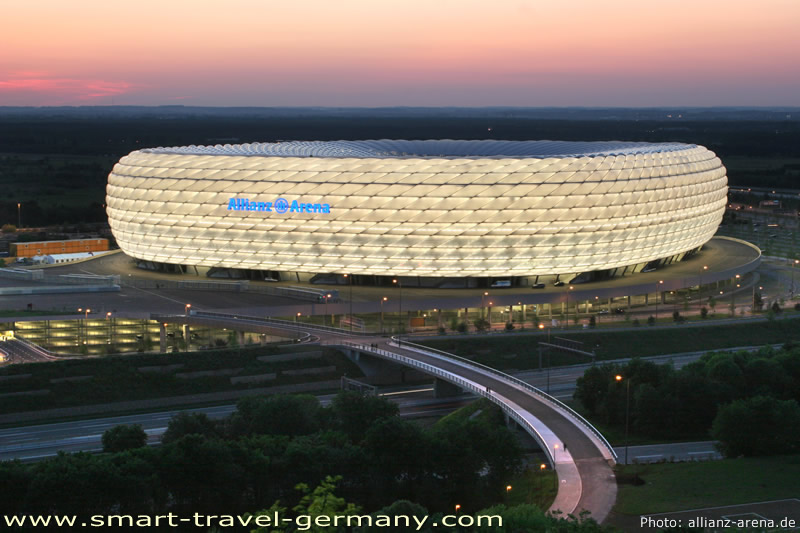 Sorry to all the Americans here, but I actually wouldn't like the USA to win it, for two main reasons.

Firstly they have two Reading FC players in their team. While I, as a Reading fan, would like them to gain confidence through the World Cup, too much exposure through success could lead to other teams trying to pinch them!

This is the lesser of the reasons though. The other is the side effects of US success. In sports where the US makes a real effort to win, such as the Olympics, the demographic and financial size of the US means that they can consistently win. Should the US decide that it actually likes football, instead of seeing it as a funny game for foreigners and kids, then it would be able to throw more people and money behind winning then just about every other country.

For all that we talk about the fantastic level of skill in Brazilian football, it should not be forgotten that a part of their success comes from the huge number of people playing football there - they can pick from a much bigger pool of players then most countries. The US could do a similar thing, and combine that with better training facilities and better domestic leagues by using their wealth.

The other problem with the US becoming more influential in football is that the US model of team sport is quite different from the more European model currently used around the world. Things like the franchise model, rebranding of teams to have more "exciting" names, increased pressure to add breaks in the game for advertising, changing rules to get rid if drawn games and the end of the transfer market for players are all aspects of football in the US, and could spread elsewhere if the US became more influential in world football.

That's not to say there isn't a place for this sporting model in other sports, its just that I'm quite fond of football as it currently is, and wouldn't like to see it change too much. Hearing it called "soccer" more frequently is bad enough

There will be glitches in my transition from being a saloon bar sage to a world statesman. - Tony Banks

Daniel Bauer
Ranch Hand
Posts: 49
posted 16 years ago
I would agree with that, a country which still calls the most popular sport in the world "soccer" leaves much to be desired. They did well in the last World Cup though (a shock win over Portugal if I remember correctly). The FIFA World rankings ranks the USA 5th best in the world! Although it is false ranking method, and most people in the sport do not pay much attention to it.

I still cannot fantom that fact that the 1994 World Cup was held in the USA - what were FIFA thinking? I remember watching it, seeing the international sports media interview Americans on the street about the World Cup, to which they replied, "What World Cup?". Although in their defence, it wasn't (and still isn't) even the 2nd or 3rd sport there. The final in the Rose Bowl was good though:

posted 16 years ago
I always considered having the USA hosting it as a poorly timed marketing exercise. That is, they were trying to raise the profile of the sport and expand into a new market but were too early. This one or the last one would have been better.
Jeroen T Wenting
Ranch Hand
Posts: 1847
posted 16 years ago
hmm, hometown advantage would have the Germans win. I'd be interested in only a single game, a final between the Netherlands and Germany.
Time we had revenge for 1974 (apart from that I couldn't care less about football).

Who is going to win ?
Germany and Poland.

To those of you who question footballs interest because of its low scoring - The most exciting game so far has been the 0-0 draw between Sweden and Trinidad & Tobago! - With a man sent off and heavily expected to lose T&T hung on despite most of the 2nd half being played out virtualy in their penalty area!! - When the final whistle blew it they were fantastic and reacted like they'd won the whole tournament!! GREAT to see!!

Hope you're all enjoying the spectacle!!

Who is going to win ?

posted 16 years ago
Japan is leading 1-0 over Australia.

posted 16 years ago
My favourite is Argentina ....... followed by Portugal (either of them shoud win)
England... saw their performance v Paraguay ... not impressed at all.

Brasil are going out in the 2nd round

"Weekends don't count unless you spend them doing something completely pointless."

Czech Republic and Italy. Czech Rep has an old but talented team, with Nedved being one of the best players in the tournament. Shame the USA got such a difficult group.

Italy, are too clever and skilful for Ghana.

Brasil are going out in the 2nd round

But Brazil didn't perform very bad recently. Why do you think so? No offense, just want to know if I am missing some major weakness of Brazil's current team.

Daniel Bauer
Ranch Hand
Posts: 49
posted 16 years ago
America were completely outplayed by the Czechs. Italy look good, as do Argentina and Holland. Japan were unlucky against Australia - they missed so many chances.

So far, the World Cup has been great, although it is like an Indian summer in Germany, and the games during the daytime aren't as exciting as the ones kicking off later in the evening.
Axel Janssen
Ranch Hand
Posts: 2166
posted 16 years ago

Originally posted by madhup narain:
I think germany has a good chance but India will

I recently read an interesting story about India was actually qualified for the 1954 world cup, but they did not play.
The Indians wanted to play barefoot and Fifa did not accept it.

So far the germans had played a more spectacular and less tactically restricted football than the dutch: 4 goals and nearly complete neglection for tactical inteligence in defeense.

Argentine is good. Tip: Radio Mitre internetradio about argentine matches are great. The signal comes ca. 40 seconds later than live TV. Just turn on the speaker when something interesting has hapened. Hearing Argentine reporter, you know the game is a life & death issue. Anybody knows Ecuadorian stations which transmit World Cup matches?
So is: Netherlands, Italy, Germany. I am a bit disapointed by England. Maybe they are going to get better in next matches/rounds like Germany did in the 80ties.

Brazil is great, but they have won too often in the last years.
So far, I am all for: Germany, Australia, Ecuador, Cote d'Ivoire, Netherlands*, Argentina, England (in that order).

-----
* Winning this time, maybe they will finally stop buging us with their 74-complex.