Darya Akbari
Ranch Hand
Posts: 1855
posted 14 years ago
You don't know that cirque? If they come near your home, don't miss them.

Arvind Mahendra
Ranch Hand
Posts: 1162
posted 14 years ago
What was that?. It looked freaky so I left in a hurry cause I have a fear of clown face.

Darya Akbari
Ranch Hand
Posts: 1855
posted 14 years ago
There is nothing frightening there only fascinating

posted 14 years ago
I've been there on my birthday in 2000, when the Cirque was in my home town (Rotterdam, The Netherlands). It was beautiful. I'd certainly recommend going if they are somewhere near you.

posted 14 years ago
I have been lucky enough to see 3 shows: "O, Myst�re, and Zumanity". Each were very different from the others, and all well worth seeing.


Originally posted by Andrew Monkhouse:
I have been lucky enough to see 3 shows: "O, Myst�re, and Zumanity". Each were very different from the others, and all well worth seeing.

I used to have a standing offer to anyone. go see the show, and if you don't love it, i would personally refund your money.

alas, i then got married, bought a house, and had a child, so the offer is no longer valid. Not once did anyone ask me for a refund.

I'm also not sure if they are still as good... they seem to have so many shows now, i worry they're becoming spread too thin, but don't really know. I've not heard many reviews of Ka or Love, so I don't know how they are...

Darya Akbari
Ranch Hand
Posts: 1855
posted 14 years ago
I saw the Dralion show in Dusseldorf/Germany and it was fantastic.

Darya Akbari
Ranch Hand
Posts: 1855
posted 14 years ago
See this intro of the Dralion show to get at least a tiny impression of what one expect.

Seeing them live however is pure magic.

My wife and I went to see the Verekai many years ago in Chicago. It was in a huge huge tent outside United Center (where Bulls play basketball).

They were absolutely fabulous. Just before the half time, the comedian act was on and the fat lady dragged me out on the stage. Yes, I was on the stage for about 10 minutes (it seemed like eternity) and I was nervous all along and tried to stay calm and cheerful. Everything happens so so so fast, you can hardly think what to do next. You just have to pay attention to the actor close to you and do whatever they tell you to do.

Now about the comedy plot. The comedians were a pair (a man and a woman) and the this lady comedian was madly in love with the male comedian. However, he was totaly oblivious to it and was actually trying to woo another damsel. So the fat lady in order to make him jealous, drags one man from the spectator and openly has a fling with him in view of the comedian.

This spectator was me.

So she and I danced around the stage holding hands but the guy wouldn't care less. So then she started kissing me on cheeks (no lips, thank God) and stuff like that. She covered good portion of my cheeks with her lipstick and shirt collar and around too. Finally he got mad at me and ordered me and the fat comedian to stand in front of him. He then took out what appeared like a magical pendulum and started to swing it in front me in order to hypnotize me. Since nobody told me anything, I just stood there, alternately looking at him and squinting to see where my wife was sitting. Now, the fat lady instead of me got hypnotized and fell to ground.

Immediately he ordered my arrest and some damsels took me away and whisked me behind what appeared to be a door. Then they put a monkey costume on me and brought me out. At this point, things were happening so fast I have no clear recollection of where I was being moved to or what I was doing. I was trying to listen to whispers but the spectator's laughing was so loud...

I do remember pressing what appeared to be a dynamite blasting jig and on the count of 3-2-1, I pressed the jig and a hidden platform in front me blasted open and 5-6 acrobats were flung high in air. They all landed beautifully and I was escorted back to my seat.

Originally posted by Darya Akbari:
Where in Belgium?

Being a Cirque Club member, and no doubt concerned as much as we are for the future of our planet, I thought you might like to know more about the ONE DROP Foundation. Guy Lalibert�, Founder of Cirque du Soleil has long dreamed about bridging the gap between human beings through our shows. This week, that dream became a reality with the official launch of ONE DROP.

What is ONE DROP? A non-profit organization that aims to fight poverty worldwide by ensuring equal access to water for everyone across the planet, now and in the future.

Access to water is one of the planet's most pressing issues. Over a billion people do not have access to water in sufficient quantity or adequate quality. Almost half of the world's population drinks untreated water.

"No one can remain indifferent when we know that at least every eight seconds, a child dies from a disease caused by drinking contaminated water," said Guy Lalibert�. "With the creation of ONE DROP, we want to mobilize people everywhere in the world to find sustainable solutions to the problem of access to water, and to adopt better practices for the use of this precious resource."

Together we can make a difference! Find out more about the ONE DROP Foundation.

Do you remember the Cirque du Soleil? It maybe give some new inspiration on how to deal with the water dilemma. 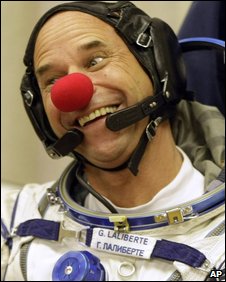 posted 12 years ago
I've been to Cirque du Soleil twice, one time was on my birthday in 2000, when they were here in Rotterdam (The Netherlands) where I live. It was a really nice show, I recommend going there if you have the opportunity. It's not an old-fashioned circus show, they do not have animals, but it's a whole experience with a story.