I'm looking at this beautiful presentation at JAX-WS.

My question is - in JAX-WS, what replaces the RemoteException of JAX-RPC? 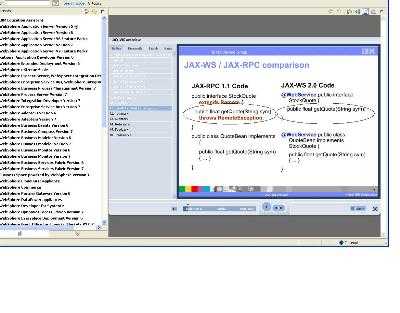 William Butler Yeats: All life is a preparation for something that probably will never happen. Unless you make it happen.

Ivan Krizsan
Ranch Hand
Posts: 2198
1
posted 9 years ago
Hi!
Nothing, as far as I know.
Take a look at the JAX-RPC article on Wikipedia, first sentences says:


Java API for XML-based RPC (JAX-RPC) allows a Java application to invoke a Java-based Web Service with a known description while still being consistent with its WSDL description. It can be seen as Java RMIs over Web services. JAX-RPC 2.0 was renamed JAX-WS 2.0 (Java API for XML Web Services).


I suspect that the "RMI over web services" idea was used when devising JAX-RPC and RemoteException was introduced since RMI use it.
Also take a look at the RemoteException API documentation - it is the parent class of a number of communication-related exception classes, so it has served, and in some areas still do server, as a general way of saying "there is a communication problem" with details specified by subclasses.
As usual, I open my mouth without better knowledge

- since I haven't been involved in developing JAX-RPC, I can just speculate.
Best wishes!

My free books and tutorials: http://www.slideshare.net/krizsan

William Butler Yeats: All life is a preparation for something that probably will never happen. Unless you make it happen.

This isn't answering your question but just wanted to say that's a really good presentation about the differences between JAX-RPC and JAX-WS.
Thanks for including the link in your post.