posted 8 years ago
Why, a Big Green Egg, of course: 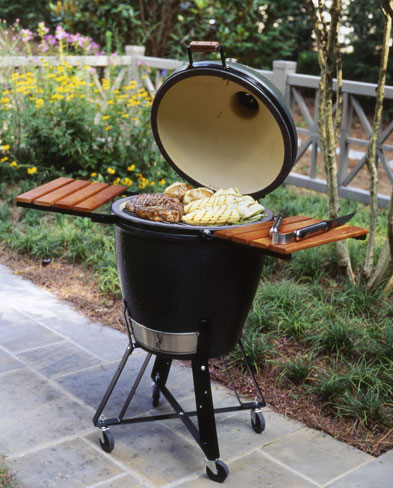 I've been Jones-ing for one of these for over a decade. I'm having my back patio replaced and I'm thinking that this would be the perfect addition to the new patio.

Of course, I'd have to get the fancy table to go with it:

It can be used for everything from a grill, to a smoker, to a pizza oven (gets up to 800ºF!). I bet I could even figure out how to make Naan in it.

Whether I pull the trigger or not depends upon how my tax return ends up. I know I'll be paying in -- just how much, I have yet to find out.

I have two friends that owned them.

The second was one of the best computer scientiist i have ever worked with. And he was even normal.

He took a sledge hammer to his as the results were never as expected.

The other was a friend of both of us. He is was a chemist and guitar maker and had great luck with his.

I looked at one as i grill a lot. When i looked at what it does i realized i did not cook that much that warrented that cooker.

But that said... at the time of the above all were living upstate NY --- it gets very, very cold and any small inperfiction will dill this kind of cooker.

So if i was in your shoes (ok it might be a tight fit) i would get one... I think you live in texas and it does not get that cold for that long --- ie: under freezing for a few months at a time.

--- now all of the above said..... niether of them could make a steak, chicken or tuna better then i and i was using a simple silver level weber gas grill. its not the cooker its the cook.

I do more than enough cooking to justify the purchase and expense -- I do the cooking every night except Friday (my night off). I like the fact that I can use it for multiple types of cooking, and that it can do things that are impossible for an indoor oven (high heat cooking, long smoking).

I know my way around outdoor cooking, so I'm sure I have the chops to handle it. (An executive chef who used to teach at the Central Market cooking schools used to drag me to all his outdoor grilling classes to handle the grilling because he acknowledged that I was much better at it than he was.)

If I had the scratch today, I'd definitely be getting one. Let's see if I change my mind (unlikely) after my taxes are done (and if I'm not in the Poor House).

posted 8 years ago
I have a friend who has had one a while. I'll see what he thinks of it...

In parts of July and August you don't even need fuel!
Bear Bibeault
Marshal

In parts of July and August you don't even need fuel!


Yup! Just hold the meat out the window in the Texas sun!