Sabine Chemaly
Greenhorn
Posts: 16
posted 8 years ago
Hi,
I'm pretty new to JMeter.
I need some help with how to read the graph results of JMeter as the JMeter tutorial is not really clear.
Anyone has some interesting links, or maybe can post some explanation?
Thank you in advance!
sugan san
Ranch Hand
Posts: 47
posted 6 years ago
You can use default graphs/listeners from jmeter.
Please find the below URL for details
http://www.technix.in/jmeter-problems-and-solutions/
Andrew Monkhouse
author and jackaroo

posted 6 years ago
I can understand why this is confusing, and I recommend that instead of using the inbuilt graphs, you might want to explore the JMeter Plugins to get some simpler, easier to read graphs.

You didn't state which graph you were using that you were finding confusing. Given how long ago you asked about this, you may have only had access to the "Graph Results" graph (so named, since it was the only graph available at the time). This can looks somewhat similar to:

The green line is the throughput - this is the line that most people care about. In the example above, I started with some static resources (I was running a smoke test, not a load test), so my throughput was really good. Then I started creating, reading, updating, and deleting data - the throughput dropped considerably as a result. However it stayed fairly constant throughout the test, so it appears quite consistent. The Throughput listed is 375.898/minute - that is transactions per minute. Divide it by 60, and you will get TPS: Roughly 6 transactions per second (averaged out over the 793 different requests I made in my smoke test).

The average time taken for any response to come back from the server was 63 milliseconds (shown in blue). Average is the sum of the samples divided by the number of samples. For example, if the response times for our samples were 2, 4, and 8 milliseconds, then the average would be ((2 + 4 + 8) / 3) = 4.6 milliseconds.

The median time taken for any response to come back from the server was 21 milliseconds (shown in purple). Median is the point where half the samples are above the median, and half are below. For example, if the response times for our samples were 2, 4, and 8 milliseconds, then the median is 4 milliseconds. As a rough rule of thumb, if the median is below the average, then it is likely you have some high outliers bringing up the average.

The deviation is shown in red - it indicates how much variation there is from the average. The smaller the better.

To put that in perspective, here is the same data as displayed in various graphs from the JMeter Plugins. 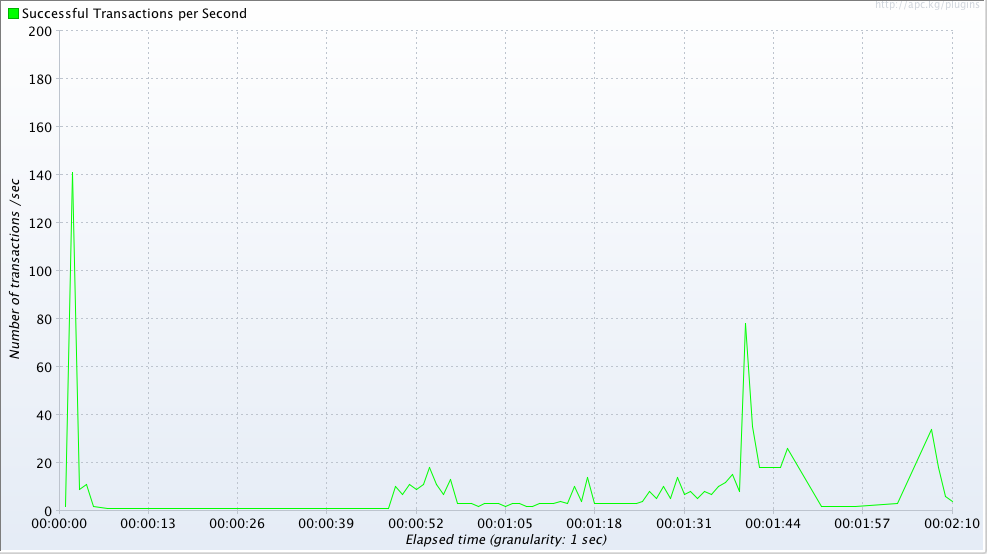 From the earlier discussion, I mentioned that throughput was roughly 6 TPS - you can see this here. If you tried to average out the graph above, you would probably guess that most of the line would be under the 10 TPS mark.