Welcome to the Ranch

Did you miss to post any previous part of your question? Because I see the numbering start from #7. If not the number 6 is represented as 6 in Hexa too.
Amrish Jhaveri
Greenhorn
Posts: 11
I like...

posted 9 years ago
Integer.toHexString(6); //will do the work!!

posted 9 years ago
Please have a look at This list of guidelines to make your Questions easily answerable..

siddharth lakhotia wrote:
7. Represent the number 6 as a hexadecimal
literal.

Well there are a couple of ways I know of to represent the number 6, a decimal integer, as a hexadecimal value. The easy way would be to understand that from 0 to 9 both decimal and hexadecimal are the same, so decimal 6 is also 6 in hexadecimal, its only after 9 that hexadecimal represents 10 as A, 11 as B, 12 as C, 13 as D, 14 as E, and 15 as F.

The other way would be to repeatedly divide 6 by 16 until the remainder is 0. Then the remainders in reverse order is your new hexadecimal number. I attached a graphic that explains this. There are a few webpages that talk about it too, and a few webpages with programs that do the calculation for you! : ) 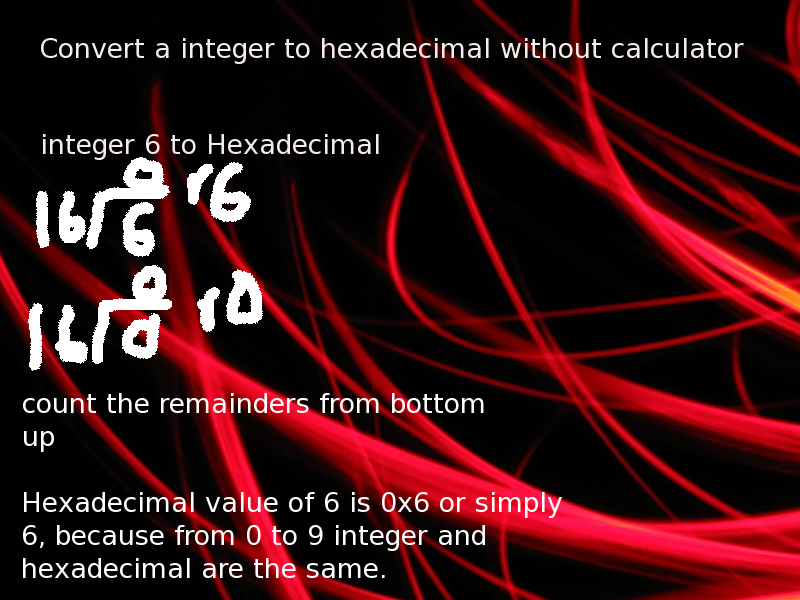 decimal in to hexadecimal converter with rosetta type stone graphic showing how they relate: http://www.easycalculation.com/decimal-converter.php
please find this relatively simple guide to converting base-10 to base-16: http://www.wikihow.com/Convert-from-Decimal-to-Hexadecimal