posted 7 years ago
In the last few years, the big tech publishers (e.g. Manning, O'Reilly) have been offering "early access" to previews of books that are still being written i.e. you can pay to get an e-book version of the chapters as they are completed, together with updates to the stuff you've already received. This may be at a (usually small) discount e.g. so readers can help with quality control, feedback to the author etc as the book develops. Sometimes you may get a discount on the combined preview e-book + print edition.

This is good if you want to get access to these materials as soon as possible, even if they are incomplete or subject to substantial revision. And I can see the benefit to the author/publisher in getting early feedback that might improve the final product.

But I also have a few problems with this model. Firstly, it can often seem like you're paying pretty close to the full price for a product that is often of very limited benefit right now. It can feel a little like readers are effectively paying to act as alpha and beta testers of the product, which is great for the publisher but perhaps not such a great bargain for the readers.

Also, perhaps because we are getting involved in the publishing process much earlier, it seems like some of these books take an awful long time to reach any kind of "production ready" state. I wonder if it might be fairer all round to wait until the book is a little more mature before launching the preview e.g. I've signed up for some books that were just a couple of skeleton chapters for many, many months. In some cases it might be a year or more, by which time the original material is likely to be out of date. I'm starting to feel like publishers are sometimes dragging out this process as long as possible in order to milk the preview/e-book market, before they finally release the printed version.

Of course, I'm a grumpy old programmer who tends to prefer printed formats for technical books anyway, so maybe I'm just wandering too far out of my ecological niche. But what do you folk think? And do any of our resident authors have any insights to share?

posted 7 years ago
As an author of a book that was in MEAP far too long I can assure you that the publishers are not delaying on purpose. In fact, quite the opposite. I often felt that the publisher was going to send Guido down to break my kneecaps if I didn't get on the stick...

Bear Bibeault wrote:As an author of a book that was in MEAP far too long I can assure you that the publishers are not delaying on purpose. In fact, quite the opposite. I often felt that the publisher was going to send Guido down to break my kneecaps if I didn't get on the stick...


So the delays are down to you pesky writers, eh?

posted 7 years ago
There are a lot more people than you would imagine involved in getting a book out, but the most delays, yes, come down to over-worked authors.

Bear Bibeault wrote:There are a lot more people than you would imagine involved in getting a book out, but the most delays, yes, come down to over-worked authors.


Yes, I realise there's a lot of people and effort involved, of course

Do you think there's an issue with launching previews too soon, or is it just a case of caveat emptor and purchasers should just accept that, like good whisky, these things take time?
And do you find the preview process helpful as a writer, or is it just another source of people nagging you to finish the book?

No wanting to distract you from your next magnum opus, of course!

posted 7 years ago
I like the idea of early access. It gives you some book rather than no book. The problem stems from not knowing when the book is likely to be "done." As a reader, when I see a publish date, I expect that to be the date. Having seen Manning's (and others) dates change over the years, I now know it is a guess. A book has the potential to be of better quality when it has more eyes.

Ultimately, what's the harm. The publisher isn't claiming to be giving you a finished book. When you pre-order from Amazon, you get 0% of the book while you wait for it to be done.

Posts: 75857
361
posted 7 years ago
Jeanne is right. There is a bit of caveat emptor to it. You get part of the book and a new chapter every month. You have an opportunity to comment on the books and point out errata. Then people who wainted can read your reviews and know whether the finished product is worth it. And nobody is obliged to go for early releases, are they? I might be interested in the Tesla batteries to go with solar panels, but I think I shall let others be “early adopters” and see whether there are any problems. With books I can easily take the other approach and be an “early adopter”. And isn't there a bit of caveat emptor to every book purchase? I know this being on the play selection committee for our local amateur theatre company; I have to buy play scripts and only later decide I don't like them.

And if books matured at the rate whisky does, nobody would ever read anything

?) that early access can allow the publisher to chivvy the writer into actually putting pen to paper finger to keyboard.

posted 7 years ago
As pointed out, no one is forced to buy the book before it's published. To me, a sneak peek is better than no peek. Btu I can see that some people would rather see a complete and finished work.

And with regards to effort, this is making the rounds on Facebook. My only issue with it is the word "ideating", which I find pretentious, and that the submerged part is too small. 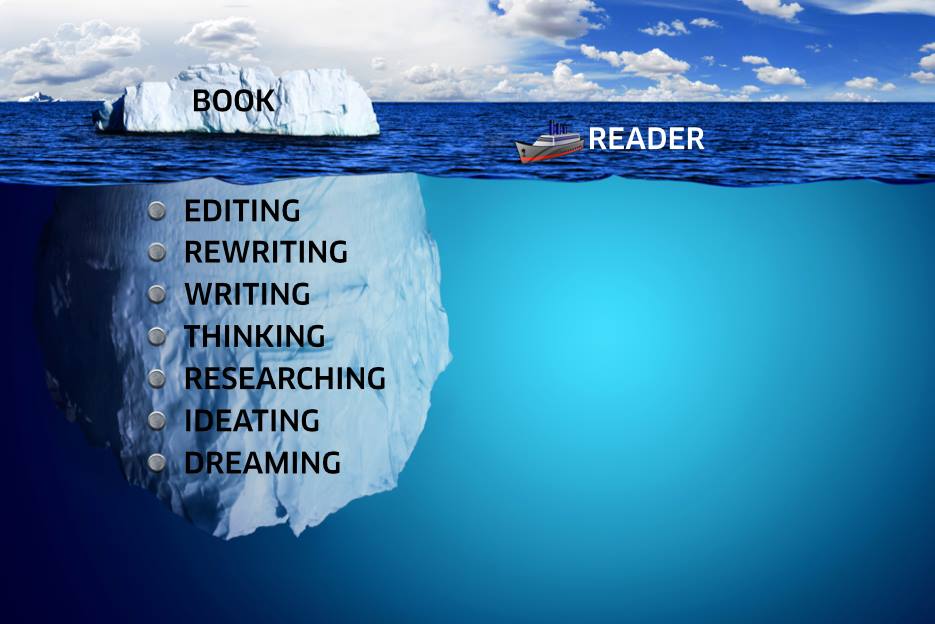 posted 7 years ago
Thanks for the thoughts, folks, and especially for Bear's view from the other side of the fence.

Re. effort: No arguments from me on that - I have the greatest respect for anybody who can take a book from a "simple" idea all the way through to producing a finished quality product.

Previews: Agree they are useful in themselves in many cases. Not so much when you pay (more or less) the full price for a product that sits in "early access" limbo with just a few intro chapters for months on end: if you haven't really got a preview, don't make me pay for it. I think this partly about clarity over the probable release schedule, and "caveat emptor" is fine so long as there's clarity on both sides.

E-books: I have a strong preference for print versions of tech books, so this is also a factor for me. The e-book preview is a substitute for the product I actually want to buy, so it can be frustrating if the availability of that finished product keeps receding over the horizon. That's why I've more or less given up buying early releases unless most of the planned book is already available.

Incidentally, the science fiction author John Scalzi had a nice variation on this "preview" business when his novel "The Human Division" was released as a series of weekly e-book instalments in 2013. You paid in advance i.e. before the book had been released, but then you got a weekly chunk of the book delivered to your Kindle according to a release schedule. Of course, the book must have been ready for publication before the first weekly instalment was released, so it was more of an alternative release mechanism rather than a genuine preview. But it was a fun approach, obviously reminiscent of the old weekly/monthly serial approach to publishing.

Anyway, enough from me. Good luck with your latest book, Bear!

Posts: 75857
361
posted 7 years ago
Charles Dickens did the same with his books, writing them in monthly instalments in magazines.