Configuring a microservice landscape, should the view be monolithic or be attached to core services?

Aritz Maeztu
Greenhorn
Posts: 2
posted 6 years ago
I'm migrating my monolithic web application to a microservice based one. I'm going to use Spring cloud and I've got a discovery service where all the rest of the services are registered. A simplified schema of the architecture is drawn below.

Both Equipment and Task services are Spring Boot based and have their own RESTful HTTP API. They take care of which operations user can perform based in roles, which are stored in a OAuth2 token, which is delivered by a proper OAuth2 Authorization server.

Now let's talk about the clients. For the mobile native app, it will grab a token from the Authorization Server for the user. Then, core services are accessed directly with that token. If the end user tries to perform an operation which has not been granted for, it will be rejected, as security is implemented at API method level.

For browser access, we could have gone with AngularJS and access the core REST API directly, but we're a bit inexperienced on it and we've chosen to implement a third service which houses the JSF framework. The views will be rendered by JSF, so the UI-Service has to talk with core services in JSON language and parse it to java (that's a breeze using Jackson library).

The decision to make the UI service monolithic is that if we want to store some data in server session, we won't need session clustering to share it amongst more UI-Services. If we want to do horizontal scaling, we might always stick to session-in-one-instance pattern.

I've even been told not to implement the UI-service as separated at all, but to integrate it in the core services. As everything is implemented in Java, that way I should not take care of JSON parsing, but it might be coupling the UI and core part tightly.

Any suggestions about it? 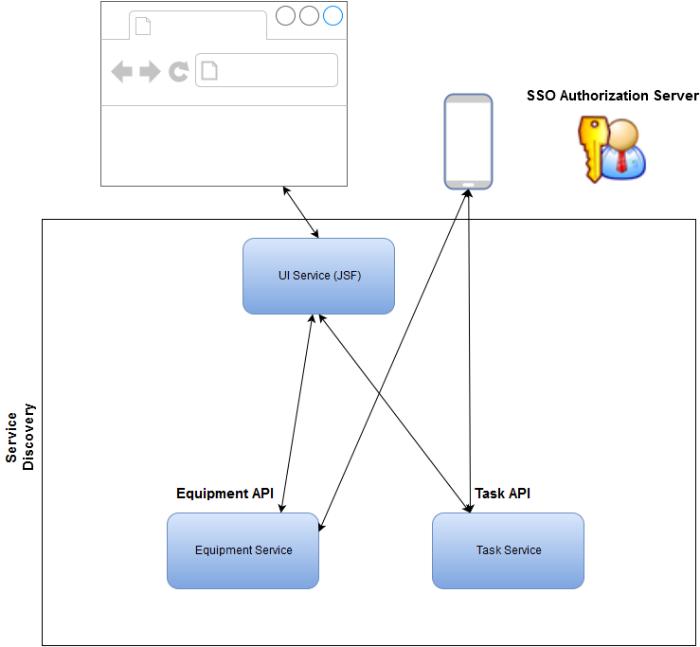