nick woodward
Ranch Hand
Posts: 386
12
posted 5 years ago
Although I've already mentioned my result in another thread, I thought I'd share my experiences here in case they're useful to others.....

I didn't have much of a background in Java (other than a sub-standard module on class design in an academic course), but had read a few books, followed a decent amount of Stanford's CS106a course, and watched a number of Derek Banas' (and similar) youtube videos. I'd built a few basic programs, and knew most of what you'd find, say in a book like headfirst java. The basics, basically!

I only mention this because I've seen people asking before, and......

it's no where near enough!


K&B & Mala Gupta
I would strongly recommend reading these books several times over. I've two A4 pads full of notes from my first read through, and they are pretty poor - yet I *thought* I knew the topics. I actually ended up reading K&B 3 times - The difference in speed and understanding the final time through the book was quite amazing: and that's what you need in the exam!

More generally, I felt K&B excelled at end of chapter questions, and brevity/accuracy, but potentially assumed slightly more prior knowledge, where as Mala expanded on more complicated areas, possibly falling down slightly with regards the mock exam and errata. I would 100% read both though if I had to do it again, and my feelings could be tainted by the order in which I read them!

The books aren't really enough (Enthuware & this site)
They ARE enough to pass. Definitely. But they aren't enough to understand the topics inside and out - something I wanted to do.

Asking questions here made me frequently realise I didnt' know the topic(s) as well as I thought I did/Roel. This is unsurprising given the latter is clearly the first step toward a compiler/human hybrid

. Regardless, this forum has been one of the best ways to solidify any doubts I had. More importantly, I often didn't know I had doubts. Reading other's posts and asking way too many questions definitely helped, so a big thanks to all that helped!

Finally, Enthuware's exams are spot on. I did one mock per day, and went through the answers in the run up to the exam. The ability to then browse the forum is great. Enough can't be said about this software, it would be (and should have been) my top recommendation. It really, really, made me feel comfortable with a couple of the more difficult questions that I would've struggled with.

Anyway, what i did, in order:

- Read the books twice
- Made lots of threads here
- 2 weeks before the exam - re-read K&B (made over 200 flash cards)
- took Mala's mock exam, K&B's two mocks, and all the enthuware
- sat the exam
- drank beligian beer.

in that order. that's how you pass

The Exam
The exam software is nicer, presentation wise, than enthuware and the K&B mocks. And that's a good thing, because you want to prepare for the worst. I really didn't see any particularly bad formatting. It's also easier. Not always, but on average. I'd say it has a few *sneaky* questions, but it's not unrelenting in it's quest to trick you, like Enthuware or Roel

. Also, I've seen complaints on enthuware's site about 'vague' questions with difficult to interpret wording - I got one in the exam, not as bad as some of the enthuware ones, but they do exist. Also, although I'm sure people say this often, I'm 99% sure there was a mistake in one of my questions - a mis-named array. No mention of array's in my mistakes summary.

Anyway, I ran out of time - because I have a habit of writing things down - even before realising the question is easy. Something to bare in mind - don't make the mistake I did: learn to work straight off the screen!! (You also CAN'T highlight the code on screen unfortunately! - maybe worth removing the ability in enthuware Paul?) I had about a minute per question for the last 8 or 9, and about 15 seconds for the last one! - again, something enthuware had prepared me well for!

Anyway, most of this post feels a little narcissistic, even though it isn't intended to be that way, so I'll stop there, but hopefully that helps someone!

Apologies Roel if you're from Bruges! It was the only one I could find that wasn't like 8%+ !! 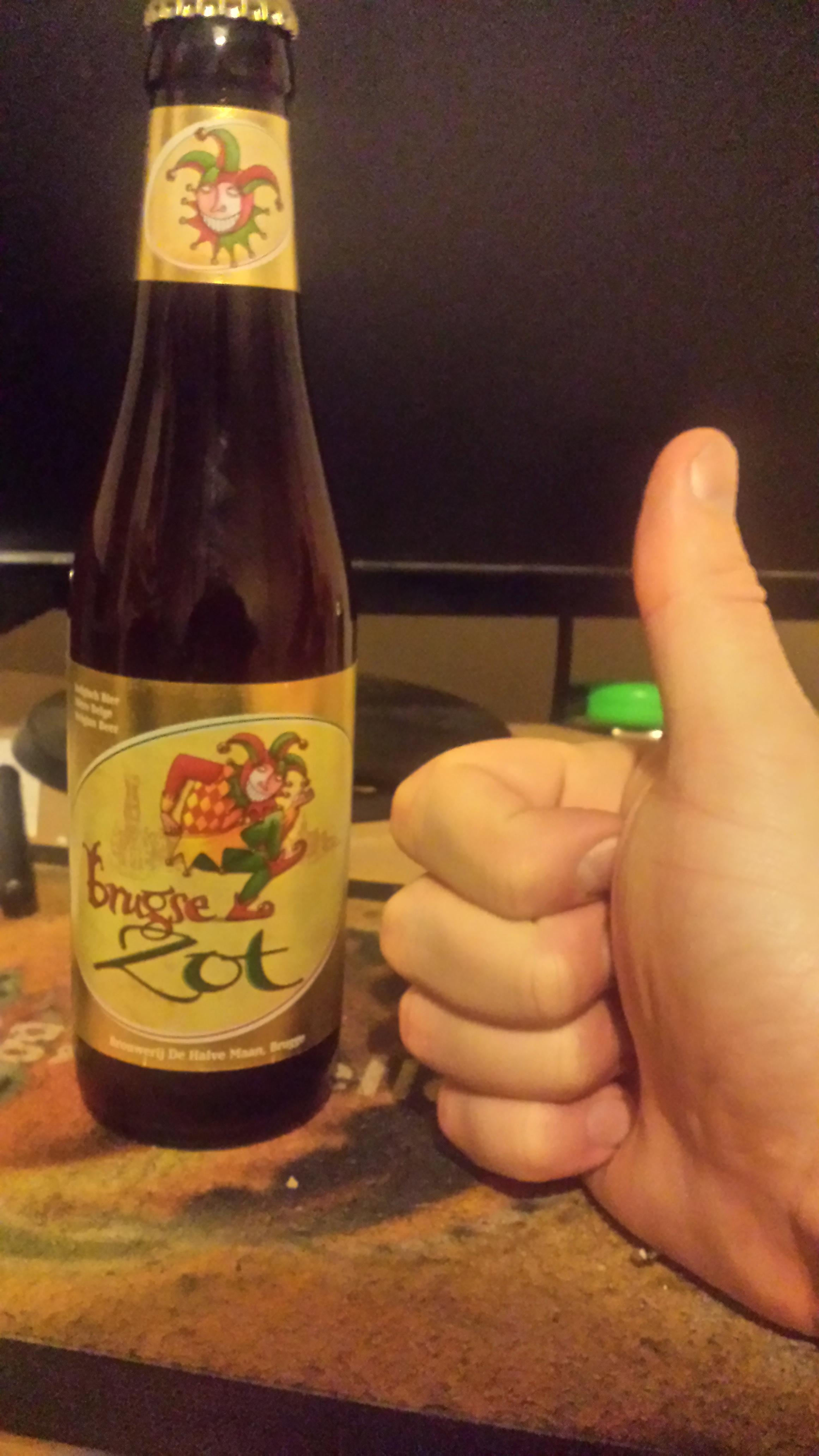 (sorry if the picture's too big!)

(or 2 or 3). And you clearly have already spoiled yourself with one of the Belgian beers

Don't forget to add your name to the OcajpWallOfFame!

(or 2 or 3). And you clearly have already spoiled yourself with one of the Belgian beers

Don't forget to add your name to the OcajpWallOfFame!

Thanks Roel! And again, the help has been massively appreciated, you definitely go the extra mile to help!

(PS: it turns out that I'd completely overlooked the fact that one of my regular favourites is Oranjeboom - but I thought I'd go the extra mile and find something obscure


Glad to hear I (we) could help you completing your journey to finally join the club of OCAJP7 certified developers. Well done!

nick woodward wrote:Although I could've passed (albeit poorly) 6 months ago, two broken elbows and glandular fever meant I ended up taking about a year to do the exam


nick woodward wrote:I'd say it has a few *sneaky* questions, but it's not unrelenting in it's quest to trick you, like Enthuware or Roel


I just wanted to prepare you for worse than the worst

nick woodward wrote:Apologies Roel if you're from Bruges! It was the only one I could find that wasn't like 8%+ !!


No worries! I'm not from Bruges but from Antwerp

nick woodward wrote:(PS: it turns out that I'd completely overlooked the fact that one of my regular favourites is Oranjeboom - but I thought I'd go the extra mile and find something obscure


Oranjeboom is a Dutch (not Belgian) brewery, so that would not qualify as beer

If you would have posted a Dutch beer, I had to give you a skull instead of a cow

*ahem* my mistake, of course it's dutch!!! at least you aren't from bruge! (for anyone else - the beer is 'bruge fools'

Yeah, I went on a stag do with my two arms in slings! (I had some movement in my left - enough to hold a beer

). It's not as bad as it sounds really. One of those things you'd hate to have to deal with but is just a bit of a pain!

Well done nick, a great result and well deserved imo based on the attention to detail shown in all your posts here.

nick woodward
Ranch Hand
Posts: 386
12
posted 5 years ago
thanks ramya - have you already taken yours? i can't remember if you'd said where you were at - you definitely knew your stuff either way!

Steffe - thanks, in particular for that one thread, although for the life of me I can't remember what it was about, it's kind of all merged into one! - anyway, i think you're mistaking attention to detail with pure fear

Paul Anilprem
Enthuware Software Support
Posts: 4588
45
posted 5 years ago
Congratulations on passing, Nick and thanks for sharing your detailed experience. Glad to know that you found our mock exams helpful in your preparation

Regarding your suggestion about highlighting the code, we allow it because that makes it easier for users to copy and try out the code in their environment.
We are also working on the suggestion that you posted in our forums (browsing through all the marked questions). Should be ready soon.
Thanks a lot for your feedback!

nick woodward wrote:at least you aren't from bruge! (for anyone else - the beer is 'bruge fools'


For those who are interested in this beer, here you'll find the official "Brugse Zot" (Bruges Fool) page (in English of course).


I fixed the link from my first post in this thread, so you can use that one to go to the famous OcajpWallOfFame

thanks ramya - have you already taken yours?


Nope, I havent taken it.

And in enthuware mock exam, is it like test1 tougher than test2...so last test must be toughest.

Ramya Subraamanian wrote:So how was the toughness of the real exam when compared to enthuware mock tests


Nick already mentioned this in the original post (see first paragraph of the "The Exam" section).


Ramya Subraamanian wrote:Is there a calculator in the real exam( for values like 2^31)


No! But you are not expected to be able to calculate these kind of values on the actual exam

No! But you are not expected to be able to calculate these kind of values on the actual exam

then we'll have to memorize values like Integer.MAX_VALUE(2^31-1). I think there might be questions like these..does line1 cause CE. and if we dont know MAX_VALUE, we cannot answer these questions.

Ramya Subraamanian wrote:I think there might be questions like these..does line1 cause CE. and if we dont know MAX_VALUE, we cannot answer these questions.


Very unlikely to happen! I can't remember having to know the actual value of Integer.MAX_VALUE by heart to answer a question on the actual exam. If there's a similar question, it's very likely to be with a byte, short, or char variable.

On the actual exam you only have a computer screen displaying the exam software, a mouse to navigate through the exam software and the writing materials. And that's all you have at your disposal!

nick woodward
Ranch Hand
Posts: 386
12
posted 5 years ago
The exam is no where near as hard as you think it is, if you're worried about that sort of topic/level of knowledge Ramya.

The most I was asked (mathematically) was to work out which out of 5 expressions was the highest - looking at the evaluation order. I think 9*6 was the most complicated part of any of the expressions themselves.

And overall the exam is noticeably easier than enthuware and the K&B questions - although that's not to say there weren't a few head scratchers. But on average, if there was a topic to be tested, they'd ask a relatively straight forward question. Mala Gupta's mock test was about on par, maybe a little easier.

The exam is no where near as hard as you think it is, if you're worried about that sort of topic/level of knowledge Ramya.

Also congratulations Roel for your patience, commitment to helping and attention to detail.

Good Luck to you.

With much respect,
Mala

I know how it feels.. when I got the LPIC-1 certification, it's a pretty good feeling

I don't know you but, congrats man