Rain, the Louvre and the Brouwersdam

Posts: 67040
255
posted 2 years ago
This will mean things to people in the Netherlands particularly.
We haven't had a lot of rain for the last few weeks, but a year ago it was different in parts of Western Europe, particularly France and Germany. The Musée du Louvre had to be evacuated because the river was so high, there were flash floods killing several people, and we were out in it getting very wet. On the way back, we went via Holland, to Delft, Maasluis, Rozenburg and Europoort, but the fields looked dry and the water didn't seem higher than normal there. More recently, we had the opportunity to see the Brouwersdam and wonder why it is called Zeeuws Windroute. That made me wonder,

I always thought, unless it was Venice, or New Orleans, or such, where there are flood controls in place that could fail, how in heck can a city flood to dangerous levels???

... then, of course, Hurricane Sandy happened. Mother nature can get really angry sometimes....

Posts: 11020
243
posted 2 years ago
Here's a map of the flooded areas in 1953, during the Watersnoodramp, which triggered the construction of the Delta Works. 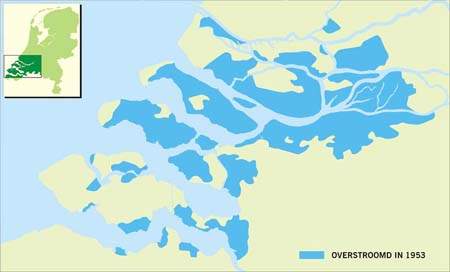 It killed thousands of people and animals, and displaced around a 100.000 people. Cities can easily flood, especially if half of your country is below sea level. Here's another map showing how much would be flooded if we didn't have our natural and artificial dykes: 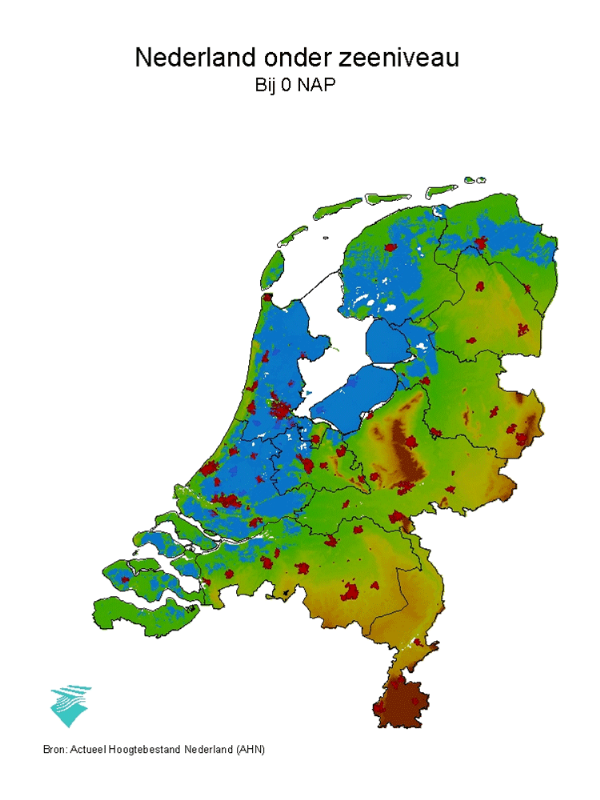 The Delta Works in the Oosterschelde have been closed around 30 times since they were built, and the last big storm which prompted it was in 2007 I think. I think the river lands flood more easily from heavy rain than the Delta does because of the sea.

The Oosterschelde contains salt water. At first they planned on sealing it completely from the sea, but that would have destroyed the existing ecosystem in the delta, so the works are open most of the time to allow the sea in.
Stephan van Hulst
Saloon Keeper

Posts: 11020
243
posted 2 years ago
For those who don't know, the big second bay from the bottom left of the map is the Oosterschelde.
Stephan van Hulst
Saloon Keeper 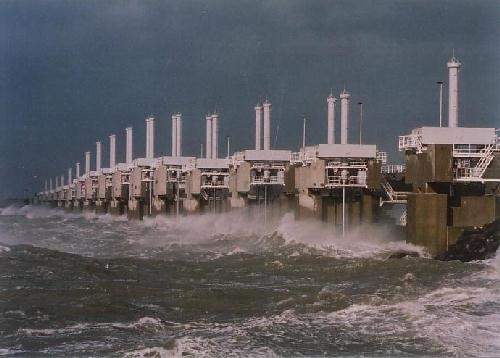 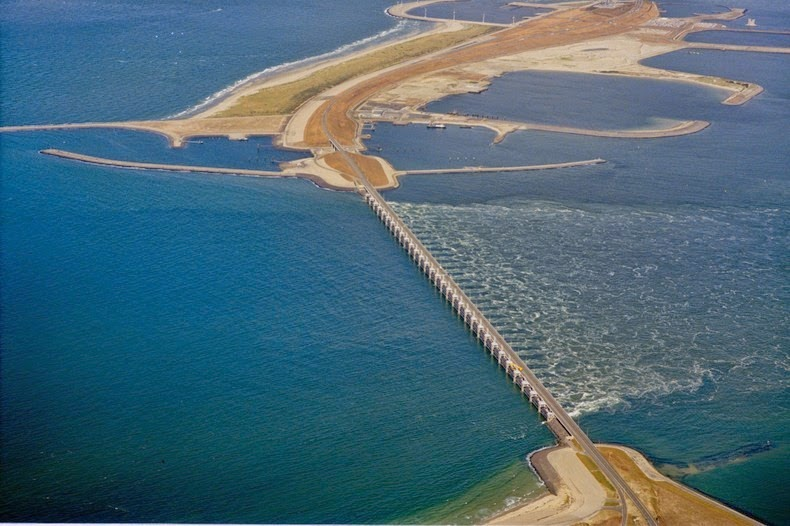 The old network of Roman roads deteriorated in mediaeval Europe, and the best means of transport was river (barge, boat, punt, etc). So rivers were the best place for trading and towns were built alongside rivers, as they had been for a long time. The water which usually escapes the river and floods the flat land adjacent (the flood plain) has to go somewhere. In modern times, builders found it profitable to build on this flat ground, so people are living on land below the level of the rivers for most of the winter.
Remember that the Western European climate has much warmer wetter Winters than, say, Russia, so rainwater soaks into the ground or runs off. It only sometimes falls as snow which stays put until Spring. The rainfall is variable; there are places less than 100 miles from me which have six times the average annual rainfall.

Stephan van Hulst wrote:. . . the flooded areas in 1953, during the Watersnoodramp, which triggered the construction of the Delta Works. . . . It killed thousands of people and animals . . .

That was before my time. In Britain it was called the Great Tide and the bridge at the weir at Mill Lane Cambridge has marks on showing how high the water rose. Cambridge is about 50 miles (80 km) from the sea. The Great Tide was caused by a storm which circled Britain coinciding with a Spring tide. Canvey Island was probably the worst affected part of England; hundreds of people died. They had to take shelter in their lofts because of the height of the water. I suspect many died of the cold rather than drowning because the disaster occurred in January.

The Oosterschelde contains salt water. At first they planned on sealing it completely from the sea, but that would have destroyed the existing ecosystem in the delta, so the works are open most of the time to allow the sea in.

Thank you. I presume then that the Haringvliet is also salty because all those waterways are connected. I didn't try tasting any of the water.
We went to the Oostvoornse Meer, where there is controversy about the ecosystem. The council have made a small breach in the dyke separating it from the Brielsche Gat so as to maintain some salinity in Oostvoornse Meer, which is brackish (the notices describe it as containing brackwater). We met a woman who said her father fishes for (I think) trout in Oostvoornse Meer and the anglers are complaining about the salinity in case it kills all the trout.

Is the island in the bottom photo Neeltje Jans taken from Noord‑Beveland? I couldn't find Neeltje Jans on any of the old maps in the museum, so I suspect it is an artificial island. The water didn't seem to be running through the sluices like that while we were watching; it was obviously the wrong stage of the tide.

Our water defenses have been very successful, yes :) As a matter of fact, the Deltaworks have been proclaimed as one of the zeven wonders of the modern world.
Jesper de Jong
Java Cowboy

posted 2 years ago
Here in NL we even have a website where you can lookup how high the water could come if the dykes broke: http://www.overstroomik.nl/

It says the water will get max. 1.0 m high at my home, and that there's a chance less than 1% that this will ever happen in my lifetime. The website also gives advice about how to prepare for such a disaster.

Posts: 67040
255
posted 2 years ago
Before I look at that website: shall I see where you live and whether that is below the water level?

Posts: 67040
255
posted 2 years ago
That website is really gloomy; it says Rotterdam will be up to 3m deep in water. Even where we stayed recently at Goedereede would only be under 2.5m. I noticed an earlier map had Rotterdam as under sea level, but several cities, den Haag, Haarlem, Leiden, Utrecht, Breda, etc. are only just outside the blue area, so they would be below high tide level.
Of course, the Netherlands is really hilly: I once cycled from Arnhem to Ede and the main road has “dangerous hill” signs every 400m, interspersed with “try your brankes” signs. The hill signs have a steep gradient shown: 3%.


Haha, no. We're flat as flat can be. When you cycled from Arnhem to Ede, you were probably cycling in the Veluwe, which is one of the only hilly areas in the Netherlands outside of Limburg.

You were probably being sarcastic, I suppose :P
Campbell Ritchie
Marshal

Posts: 67040
255
posted 2 years ago
Even flat places like Delft are hilly. But that means the bridges, which look really narrow and really steep. In England they would be called hump‑backed bridges. And there are the dykes, the hilliest I have cycled being on the way from Delft to Delfgauw. Even if you try places like Duifpolder, going towards Maasluis from the Vlaardingse Vaart, there seem to be dykes to climb every now and again.
And you need to cycle from Scheveningen to Hoek van Holland, through the dunes. The Kennemeerland is even hillier.
The only part of Limburg I know is Venlo, which fulfils the Dutch stereotype of being as flat as a pancake. Nice place, well worth a visit. But last year we went from Kerkrade to Aachen, so we could see that Southern Limburg is hilly.

The worst hill I know in Holland is between the harbour at Europoort and the ship. But that is made of concrete.

Posts: 11020
243
posted 2 years ago
You should project a map of the places you've cycled over a height map of the Netherlands. There might be a correlation.

Posts: 67040
255
posted 2 years ago
What a nice map. You can clearly see how hilly the cost is near Scheveningen and north of Katwijk.
I know the dark blue areas near Leiden as well; I remember once cycling parallel to the motorway . . . I was going faster than the motorised traffic. Actually< I think it was nearer Sassenheim than Leiden.

Stephan van Hulst wrote:Here's a map of the flooded areas in 1953, during the Watersnoodramp, which triggered the construction of the Delta Works.

Small question, probably nitwitting here but how can Goeree-Overflakkee be flooded in 1953, but not below see level in the second map.
Stephan van Hulst
Saloon Keeper

Posts: 11020
243
posted 2 years ago
The blue areas are below average sea level. That means that areas that are not blue may be below sea level in case of high tide.

During the Watersnoodramp of '53, there was a combination of spring tide (when the earth, moon and sun are all lined up to create the highest tide), and a storm surge that caused the water to rise even higher.
Campbell Ritchie
Marshal

Posts: 67040
255
posted 2 years ago
On the imgur link which Stephan showed us last week, you can see that the Goedereede area is bluish, corresponding to something like 0…−1m (i.e. slightly below sea level) whereas nearby Ouddorp is rather higher, slightly greener, maybe rising as much as 3m, but not as high as the dunes to its west. Of course a storm surge like in 1953 would overtop the dykes, particularly if there are large waves, and wash them away. The sudden flooding killed so many people.

The remainder of Goeree appears no higher, and most of Schouwen appears even bluer on that map.