I am just starting my career in IT Recruitment and, as I have to learn most things myself and I am the kind of person that likes to be prepared, I thought maybe you could help me with answering some questions based on your experience.

1. Do you know any websites/places where I can deepen my knowledge about programming languages? Something written in a quite simple way, if that is even possible.
2. What is your opinion about Linkedin recruitment? Do you mind it when recruiters approach you there?
3. Once you are looking for a new job opportunity, where do you usually look and what kind of offers/job descriptions speak to you the most?

I have a lot friends working as a developers and also brother starting in the IT field but they are all at the beginning of their careers (as me) so there are a lot of questions they can't answer at the moment. I honestly just want to know your opinion about lots of topics so that I can improve my skills and make my (and yours) life easier. I hope I can receive some help here.

Thank you in advance

posted 3 years ago
Welcome to the Ranch

Thank you! Glad to be here

posted 3 years ago
Aneta,
#1 - Answering questions here and on Stack Overflow helps. If you don't know an answer, research it. Or wait a day and see what other people said. Great way to learn
#2 - It's usually spammy. I find a higher percentage of Linked In Recruiters just saw "Java" and clicked. Where those who take the trouble to find my email are often (but not always) more targeted. In fact, one company I would consider working at if I was looking as approached me a few times.

Aneta Mazurkiewicz
Greenhorn
Posts: 3
1
posted 3 years ago
Jeanne,
Thank you very much for your answers.
#1 Yes, I joined stackoverflow recently and for now I am just taking it easy and seeing how it works. But I will surely follow your advice.

#2 Again yes, I understand you

The problem may be also because of lack of proper training before actually starting to recruit people (also in my case to be honest) and great pressure on the recruiters. But I completely understand your position and that is also the reason I am asking this questions, so that I can understand what you prefer and not be the annoying recruiter.

#3 I suppose that the opportunities come to you, not the other way around? Just asking to know if you are also looking out there in order to find interesting new job.

Thank you once again and have a great week!

posted 3 years ago
Welcome to the Ranch, Aneta!

There's a significant difference between StackOverflow (and its relatives) and the JavaRanch and forums like Oracle's Java forums.

StackOverflow is often the best place to go to get an immediate solution to a problem. The downside being that that's all they want is the solution. I find it off-putting that a significant amount of space is spent on the -Overflow forums chiding people for asking the question at all, not bothering to check if anyone else has asked the question* or making an inappropriate answer (despite the fact that some of the most useful answers I've seen have been tagged as "off-topic", "opinion" or otherwise inappropriate). Still, if you have a deadline and you just need something that works Right Now, it's one of the best places to go.

"Serious" forums like Oracles tend to be where you go to ask the hard questions. Often the product developers themselves are present in these forums. Unfortunately, they have the reputation for flaming people who ask dumb questions or complain about features that the moderators think the world needs (as opposed to what the world wants).

The CodeRanch was developed as an alternative to "serious" forums as a place where you can ask stupid questions or even ask questions that are frequently answered without being flamed. We differ from the Overflow forums in that we don't focus on giving immediate answers but in trying to help people actually understand what they are dealing with. Stack Overflow will give you copy-and-paste code. We tell you how and why to write the code yourself (and frequently, alternative ways to design and code).

---
* When someone asks a frequently-asked question, the ideal response would be to simply link them over to the frequent answer (which is what we like to do) and not waste space lecturing them on it. Although a major complaint I have with StackOverflow is that people will often mark a question as duplicate when in fact it merely casually resembles another question and has a completely different answer.

Aneta Mazurkiewicz wrote:#3 I suppose that the opportunities come to you, not the other way around? Just asking to know if you are also looking out there in order to find interesting new job.


That's because I'm not looking. If I was putting in effort, I imagine the ratio would be different

posted 3 years ago
You can deduce my approach to question #1 from my earlier digression. Here's the other 2 answers:

#2 - I don't mind hearing from people via LinkedIn. I'm generally not going to "friend" recruiters casually, though. I prefer that my links reflect people who I actually have a fairly strong relationship with. And in fact, one of the flaws to me in LinkedIn is that it doesn't allow for distinguishing people I know from people I interact with on a regular basis. While I've gotten my fair share of offers to work at a warehouse assembling/testing parts for $15/hr, I'm not sure I could say that LinkedIn is any worse source for such clueless "efforts" than anywhere else.

#3 - Anything regarding relocation doesn't interest me. I know I could be a lot wealthier if I joined the ranks of migrant workers, but I like where I live just fine and I've already paid off my mortgage. And frankly I've gotten sick of commuting through city traffic. These days I work for people all over the world from my home office. This "offshore talent" thing isn't all one-way.

Stuff that offers opportunities for new and shiny tech can appeal to me although I've never stinted at doing workhorse stuff (and occasionally adding new and shiny technology to it.) Flexible work environments are a major consideration. I don't want foosball tables and tat, I want reasonable working hours and conditions and reasonable management.

A lot of what I look for isn't so much "pros", since I'm fairly easygoing once the basics are assured. What gets more attention are the red lights: 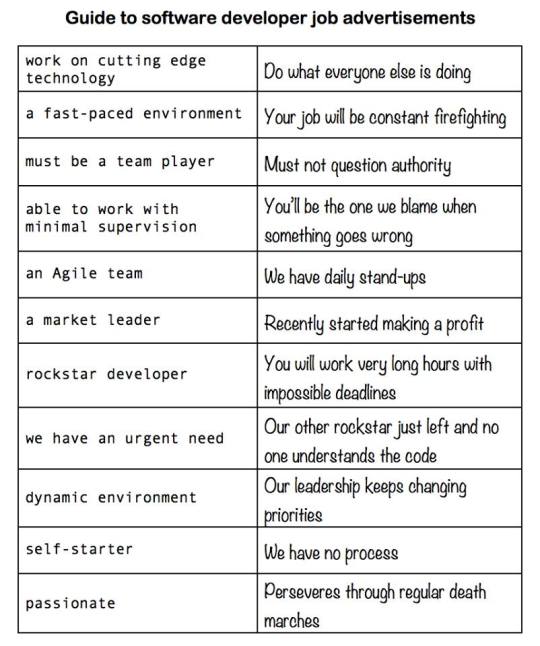 I have just started my career with a one Staffing company like 10months ago.

Have minimal ideas about details and i have verified the bgc of one my colleague who is abconded from the organisation.

So, just want to know is it ok or what could be the action can be taken against me.

Thank you in advance

posted 2 years ago
May I ask what is your academic background Aneta?