My Swing GUI program saves a few user settings in a text file located in the project folder. Until a couple days ago, I've been running and testing exclusively in Eclipse IDE. So, I've just become aware that I can't read a file once I've packaged my project into a runnable jar in the same way I can while I'm in the IDE.

Using the IDE, my code to access and read a text in a file is something like this:


In addition, if a user enters a string into a text box and "executes" a method, those updated strings are overwritten in the text file. That code looks something like this:


From what I understand, I need to use getResource to access those same text files once I've packaged as a jar. Is there any tidy way to alter my source to run using my current code while running in the IDE, but then to use getResource when I'm running the jar? Any feedback here is appreciated.

Many thanks for your reply. I've done a bit of homework on your response before returning.

It seems that all getResource() solutions involve reading the text as a stream. I think I can deal with that okay, but I've been unable to get a working code snippet to build from. I thought I'd start by printing the stream to console. Below, I'm just trying to confirm that my code can actually find the resource.

I've tried several variations of this as a jar and in Eclipse:


In every case, I get

to console. Obviously I'm not finding the text file correctly. I suspect my path is just wrong. I've tried a number of paths:

Attached is a screen show of my file structure. Should I be able to use this same code in the IDE and jar?

I'm confused about the use of the getResourceAsStream() method. Should "Swing" be the name of the class from where this call is being made?

Many thanks for your help. 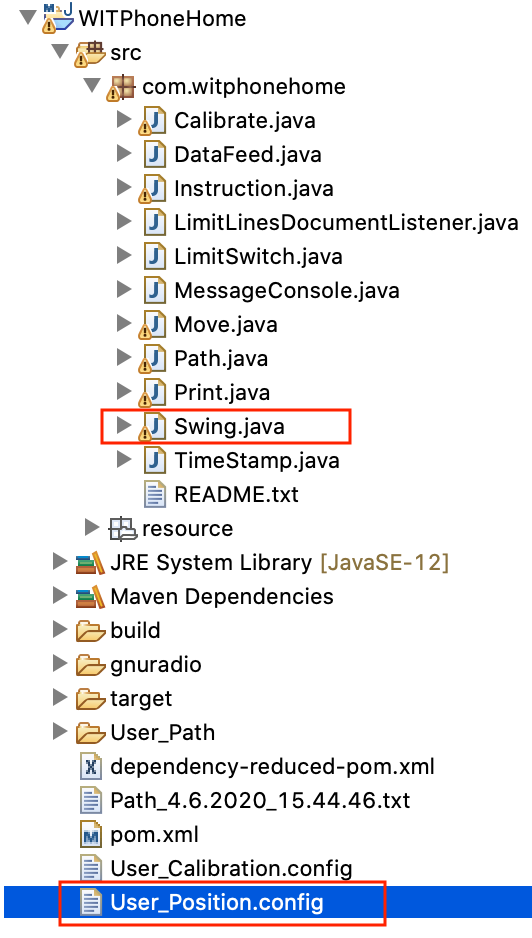 posted 1 year ago
Resources are files that are on the class path. With a normal Maven layout, that means they should go somewhere in src/main/resources (or src/test/resources for resources that are needed only for unit tests). I notice you have a different layout, but I do see a resource folder. Put the file in there, then you should be able to read it as a resource.

posted 1 year ago
After Rob's suggestion the path should be "/" + fileName.

Thanks for your replies. I got it working using the path as follows:

Then I used Scanner to get the nextLine() method, similar to my original BufferedReader implementation:

As Cary mentioned, the problem indeed is how to change the content of the file. I found this on StackOverflow, describing my problem: https://stackoverflow.com/questions/2797367/write-to-a-file-stream-returned-from-getresourceasstream

The second responder suggests this:

But cautions that this might be problematic for Windows users. I'm also not clear what a URL object actually is. (I'm on MacOS and plan to deploy to Raspian, but stability in Windows would be very valuable.) Can either of you give any feedback as to why this would be unstable in Windows? Any additional pointers or ideas for how to indirectly edit the resource file is appreciated.

Simon McNamara wrote:As Cary mentioned, the problem indeed is how to change the content of the file. I found this on StackOverflow, describing my problem: https://stackoverflow.com/questions/2797367/write-to-a-file-stream-returned-from-getresourceasstream

In your original post you mentioned that you packaged up the project in a JAR file. That means that the resource is inside the JAR file, which means that you can't change it.

But as the third responder to that SO thread said, you shouldn't be changing a project resource anyway. Even if it's, say, default settings which can be changed by the user. What you should do instead is to put a copy of the resource in the user's home directory and work with that. The process is like this:

1. Look for a file in the user's home directory.

2. If it's not there, copy from the resource in the JAR to that file.

3. Open that file and modify away.

The system property "user.home" gives you the location of the user's home directory.

Many thanks for your replies. In the end, I realized that for my application, I really didn't need a resource file at all. On startup, if A_record_file.txt doesn't exist, I create the directory. If it does exist, I grab the appropriate Strings and assign them to the GUI.

For future users, I get the home directory with:

Thanks for your help.
Tim Holloway
Saloon Keeper

posted 1 year ago
Actually, changeable resources are generally known as "preferences". Support for Preferences has been around for a long time - since Java 1.4. It provides an abstract mechanism for preference handing.

The way it generally works is that you put your default preferences in a resource - sometimes several resources - in your JAR. Then when the user runs the application, they may create (unknowingly) user-specific preference data as part of application startup, and likewise, some of their operating environment - say, window sizes and positions - might get written to preferences on shutdown. In between, there will often be a Preferences menu on the File or Edit menus (or occasionally somewhere less obvious) where they can set personal preferences. It all goes into the Preferences subsystem.

Traditionally in Unix, and thus Linux, the user preferences would go into an invisible ("dot") file for the application - or sometimes an invisible directory. However, that was getting to the point that half of one's home directory was preferences, so a preferred option these days is to make app-specific subdirectories under $HOME/.config.

Also, it is not uncommon to have global preferences. In Unix, those are usually under application-specific subdirectories under the /etc directory. So you have a hierarchy: internal (resource file(s)), global, and user, with each layer taking precedence over the previous one and generally only including those values that override lower-level items.

Preference file formats can be whatever you want. Commonly, people use Java properties files, Windows .INI files, XML files, or the like, but the actual preferences interface is flexible. You should, for example, be able to keep preferences in a SQLite database or even on an independent server.

Thanks for posting about Preferences. I'll check that out. Seems like my solution detailed in my previous post is pretty similar to global preferences.