Posts: 69871
278
posted 2 weeks ago
No, that can't be right. A sloping lake is what you use for water‑skiing, and I am quite sure I have never tried water‑skiing on a bicycle. It was hard enough getting up this slope pushing, and it was nearly as bad coming down because of the loose surface. It's a 1 in 5 slope (≡20%). It is a bit over 6 furlongs long (≈1200m).
BattersbyIncline1X.JPG

Posts: 69871
278
posted 2 weeks ago
Down the bottom of the bank, and in the Dale on the other side, there was a gentle breeze, but up on top of the moor (when we came back yesterday), it was windy; I think we had a true gale without gusts. The trees get used to being blown about; the pictured rowan (=mountain ash) (Sorbus americana) has done what many trees do round here, and bent to the wind. It is leaning more‑or‑less west to&#a0;east. The last time we went round there (well about 2 miles from where we rode) Ruth asked how far we were from home; it was like being in a different world. We got about 20 miles as the crow flies from home, and were in the sort of countryside where you wouldn't want to get lost in Winter. I have been lost there in midsummer and that was bad enough.
RowanBlownByWindX.JPG 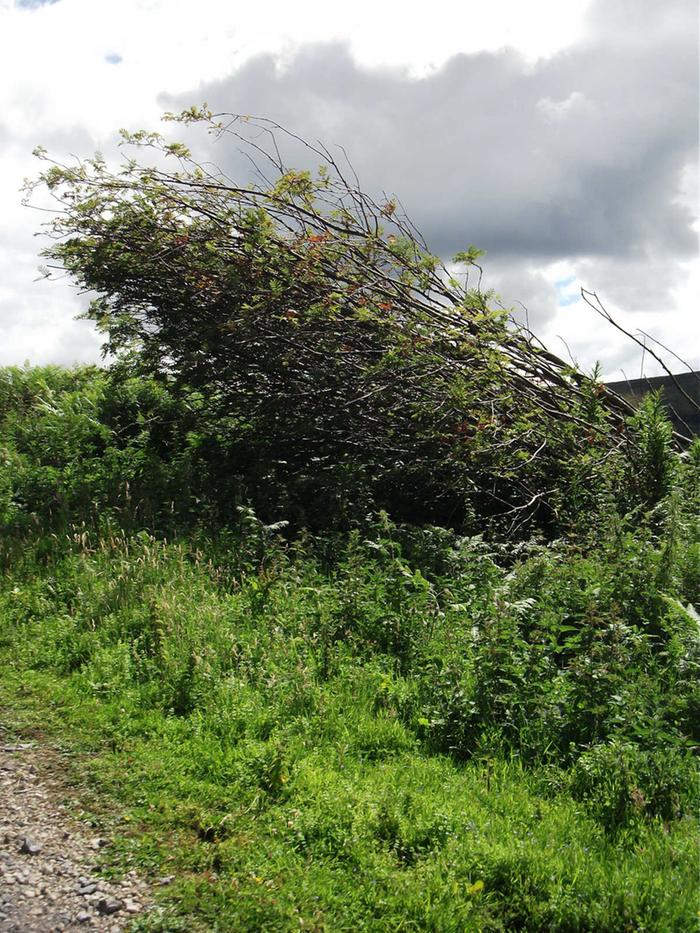 Posts: 69871
278
posted 2 weeks ago
The principal industries where we went are farming (mostly sheep and other livestock) and people chasing the grouse and tourists chasing daffodils. But there isn't any shooting in July, nor were there any daffodils to be seen. But from the 1860s until the mid‑1920s this was an area full of heavy industry. I think most National Parks in northern England are post‑industrial landscapes. In fact, whenever we were off the tarmac, we managed to ride all the remainder of the way along old railway lines.

And to think that is a disused railway line. I am pleased to see Strava used its proper name; Wikipedia and the National Park call it the Ingleby Incline.

The next photos give a hint of what the industry was. The colour of the bed of the drain alongside the old railway tells you the water is full of iron salts. If you look up chalybeate on Wikipedia, it shows a photo of similar staining on rocks in Rosedale. That was a long way from where my photos were taken. A good 4 miles. There are still a few relics of ironstone mining, iron smelting, and lime-kilns in the Rosedale area. They used to take ironstone to Teesside and points north, importing coal etc. which had to climb the bank. There was iron smelting in other places too, for example Glaisdale. A collapse in the iron market in the 1920s put paid to all that industrial activity
ChalybeateWater1X.jpg 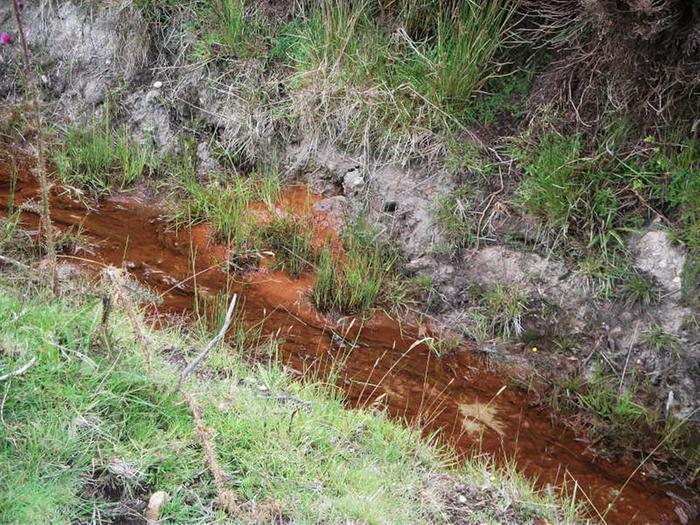 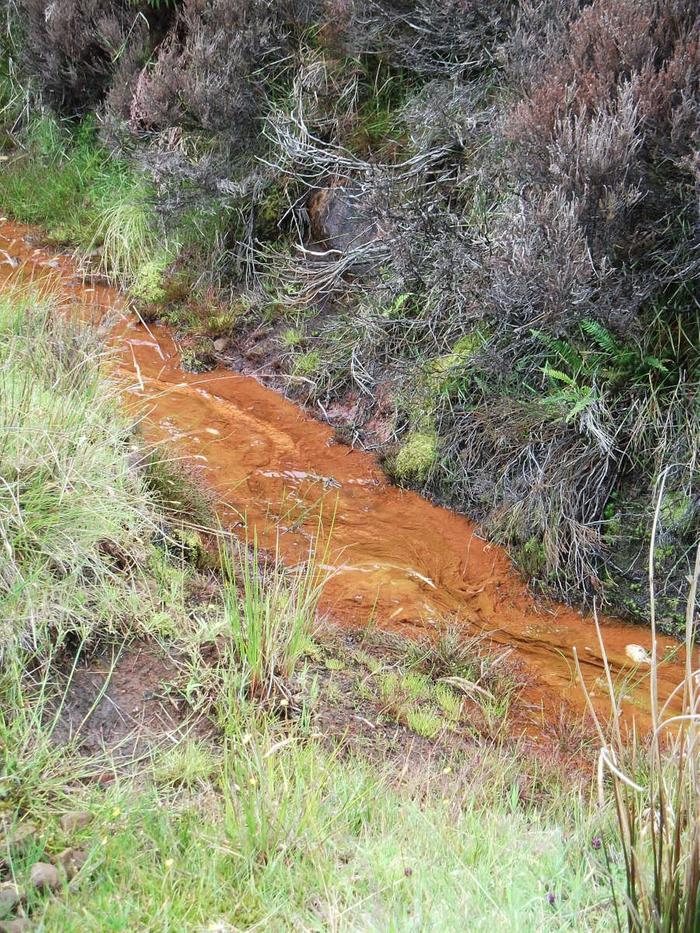 posted 2 weeks ago
May I present you you the following:

This may not seem much, but this is Florida, maximum elevation 100m above sea level. Which is about 400miles from this spot.

In older times, I used to travel this way sometimes and the thing that I always dreamed of doing was taking a skateboard all the way down.

In actual fact, I think that this is a secondary road in the vicinity and that the spot I remember was on Highway 27, though I can't find it on Google. But back then, the Citrus Tower tourist attraction in Clermont (which is still there) was situated in miles and miles of orange groves on both sides of the highway, From the looks of it, they all got nuked long ago. There was a period of really bad freezes back in the 1980s that was lethal to the commercial industry and most of the citrus farms these days are located south of Orlando, now. It's much warmer now, but developers swooped in in the mean time, so groves weren't re-planted.
Clermont.png

Posts: 69871
278
posted 2 weeks ago
We have never tried growing oranges in that part of the country, except possibly in greenhouses attached to Big Houses.
Of course, nobody has ever tried taking trains up and down the road you showed us the photo of, Tim.

Campbell Ritchie wrote:We have never tried growing oranges in that part of the country, except possibly in greenhouses attached to Big Houses.
Of course, nobody has ever tried taking trains up and down the road you showed us the photo of, Tim.

No, the rail lines tended to border the coasts. Key West, in fact, was only accessible by rail (or boat) initially. It was only after the Labor Day Hurricane of 1935 when much of the railroad was destroyed that they converted it into the highway that it is today.

We have a program in Florida called "Rails to Trails" that converts unused railway paths. There's a scenic one no more than 50 miles from the spot in my picture. Another one leads eastwards into my town and that one puzzles me, since it served as a direct connection from a major railyard to downtown. Very popular with horse and bicycle riders now.

Oranges are our consolation for not being able to grow apples.

This line certainly didn't; it was more or less perpendicular to the coast, which is less than ten miles away as the crow flies. And your railways didn't have to rise 900′ in under a mile. As you said, Florida hasn't got 900′ to rise anywhere,

We have Sustrans here. In fact the Sustrans No 1 path (part of the North Sea Cycle Path) passes slightly over a mile from where I am sitting. It also has a “No cycling” sign on.

Oranges are our consolation for not being able to grow apples.

I picked my first apple of the Summer today, It wasn't ripe. Not even close.

posted 2 weeks ago
Our oranges don't even begin to look ripe until after Halloween.  But limes are coming along nicely.

Not as bad as the 33% grade coming out of Grosmont. There's a railway line in Grosmont too but the engineers didn't try to send it up the 33% grade.

posted 2 weeks ago
I was wondering how they got trains up that grade, when it far exceeds the grade of any working railway today. So poking around Wikipedia got me this:


Because of the difference in height between the junction at Battersby railway station and the moorland location of the workings, a steep 1 in 5 (20%) incline[1] was located at Ingleby, where trucks would be hauled up the slope to a height of 1,200 feet (370 m) above sea level using the weight of descending full wagons. The length of the incline was 1,650 yards (1,510 m) and the wagons descended at an average speed of 20 mph (32 km/h) which resulted in a journey time of 3 minutes from top to bottom.

This would have been quite something to watch in operation.

Posts: 69871
278
posted 2 weeks ago
A 1 in 3 at Grosmont? I didn't think even the road to Beck Hole was that steep.
[edit]There is a >> on the road to Egton on the map, but I never thought it was a 1 in 3. Robin Hood's Bay and Runswick have 1 in 4s and the banks to Littlebeck are all pretty scary. I have only ever tried Littlebeck downhill. I have done all other banks mentioned uphill at some time or other.

The incline had a dirty great drum with 1″ thick steel wire ropes on; when one wound off (down) it wound the other wire on (up). It could carry about 50 (long) tons at each end. I would find 20mph on the end of a rope pretty terrifying, but some people did use the trucks as transport (illegally). All that remains of the winding house are some foundation stones (yard‑long sandstone blocks) and a few bits of oak sleeper at the top of the incline. Some of the bank is only wide enough for single track working, so there must have been four sets of points, and somebody would have to change them quickly as the wagons went past.
There is the remains of another incline at Seaham, about 25 miles from here the other direction. That would have carried coal from the mine to the harbour.

Campbell Ritchie wrote:A 1 in 3 at Grosmont?

Here's a link to our picture of the sign at the top of the hill, taken when we walked the Coast to Coast in 2008: Thirty-three percent.

Posts: 69871
278
posted 2 weeks ago
I thought the only real 1 in 3 was chimney Bank, which is a good ten miles from there. That sign must be coming down from Lease Rigg, above Esk Valley. Whenever I have been out to Esk Valley, I have used the path following the old course of the railway.

posted 2 weeks ago
We walked up that 33% grade, eastwards out of Grosmont, and then across Sleight's Moor. I believe it was in the Tour de Yorkshire last year under the name of "Cote de Grosmont", which you can watch on Youtube if you want to see pro cyclists dealing with the grade -- no, upon further web-searching that only refers to the first 500 metres past the station, which is a mere 12.5% grade on average.

Posts: 69871
278
posted 2 weeks ago
That's Fair Head Lane. I shall have to go there and see. Don't know it because it doesn't lead to any beer. It looks about the same slope as the road from Ruswarp to Littlebeck.

Campbell Ritchie wrote:That's Fair Head Lane. I shall have to go there and see.

I found the sign on Google Street View: Sleights Moor.

Edit: And no, there's obviously no beer there. It's at the bottom of the hill.

Posts: 69871
278
posted 2 weeks ago
Yes, it is Fair Head Lane. The nearest beer is at the Tunnel Inn or the Crossing Club back at Grrosmont.