Elise Ray
Greenhorn
Posts: 4
posted 2 weeks ago
I am trying to create a Java Program that can decipher a secret message from a text file. Each of the first letters are a command followed by a slash and a letter or number(for indexing) that will build the phrase. The commands are attached as well as the text file I created!

I am trying to get started on it, and I am stumped on how to begin and which direction to go towards building it. Does anyone have any ideas? I am new to Java, and learn better when hearing others perspectives! 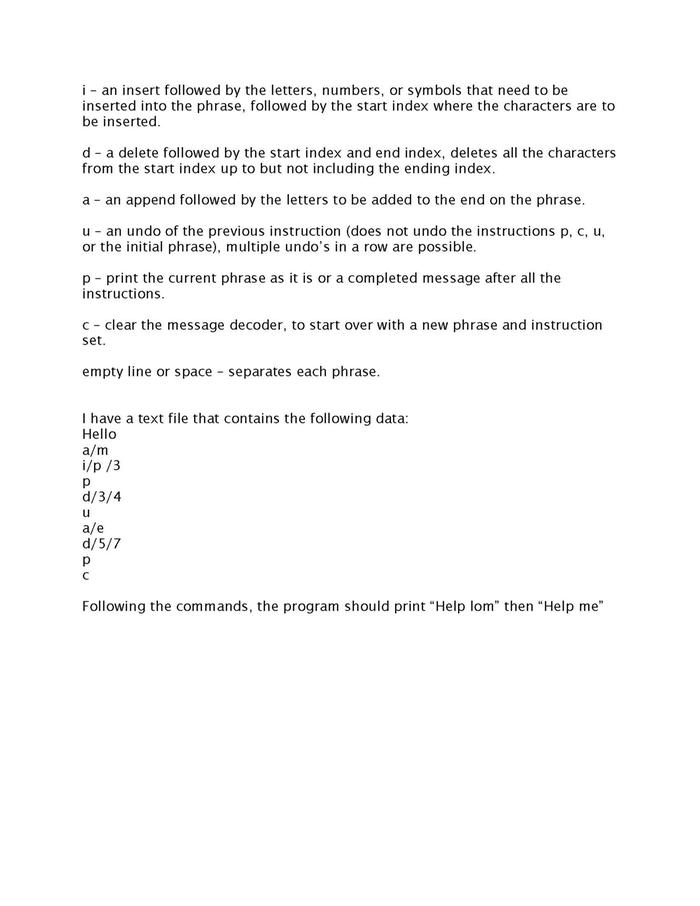 The first step is to parse the text file into a sequence of commands. You should start by writing a separate class for each of the possible command types, and another class that will take a sequence of text lines and convert each line to an instance of one of your command types.

Don't let the commands do anything yet. The first step is only to convert the text file.
Carey Brown
Saloon Keeper

posted 2 weeks ago
What is the difference between these two
Hello
p
One is text the other is a command. According to your initial statement a command should be followed by a slash. Like
p/
This would differentiate text from a command.

Elise Ray
Greenhorn
Posts: 4
posted 2 weeks ago
p will print the word with the commands that have occurred so far
Elise Ray
Greenhorn
Posts: 4
posted 2 weeks ago
I've gotten a lot done, and the program seems to be running well and displaying the correct output! There is also a Driver with the main method that calls the Decoder class and passes the textfile. Do you have any suggestions on how to improve it? I would appreciate some feedback!

Elise Ray wrote:p will print the word with the commands that have occurred so far


I think it's text with only the letter 'p'.

You can use str.split("/") to get the arguments for a command.

Elise Ray wrote:Do you have any suggestions on how to improve it? I would appreciate some feedback!

Here's an example of an implementation:
It's probably overkill for this exercise, but you might also create a separate interface for preprocessing instructions:

Now all that's left to do is iterate over the list of instructions and execute each one on a shared message builder and printer.
Elise Ray
Greenhorn
Posts: 4
posted 1 week ago
Thank you for the help! I am going to keep working on it and keep in mind the suggestions you gave!