posted 1 year ago
Went to McDonalds to grab a coffee - this is what I found.

I see so many kiosks running Windows - why not Android or Linux?  Is it due to special payment processing libraries or something similar that aren't available with other operating systems? 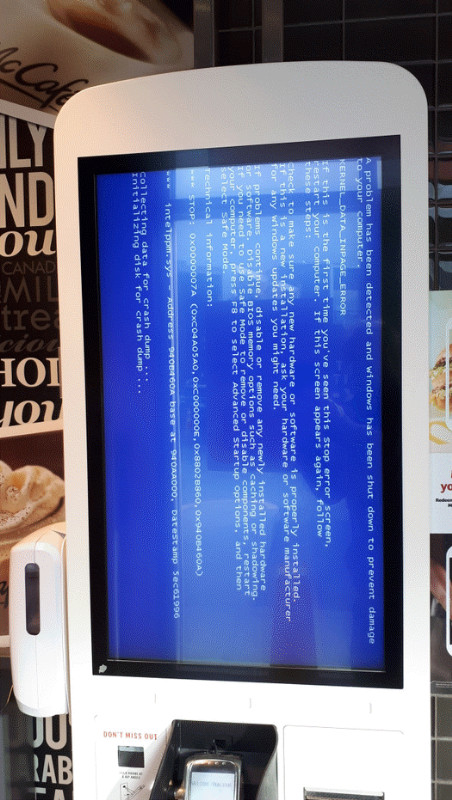 posted 1 year ago
Well, I've seen Linux in rebooting airline entertainment systems. But without any firm evidence I'm going to suggest that large corporations have been heavy Windows users for a long time.

Posts: 75707
354
posted 1 year ago
Are you telling me there are screens in shops not showing the blue screen of death?

posted 1 year ago
Like Paul, I've seen entertainment consoles on airplanes booting up Linux. I was passing through Denver International one time and took a picture of one of their flight information displays with a BSOD (it was quite a few years ago but I'm still pretty sure it was a Microsoft BSOD).

posted 1 year ago
I think Lowes Hardware stores have used Linux terminals as well, although come to think of it, I just replaced a dishwasher and I think I noticed one of the more archaic Windows GUI frameworks. Perhaps. Either that or one of the more distinctive Linux look-and-feels.

Banks and other old-line businesses were long entrenched in the IBM world, and when IBM PCs came out, that pushed them into MS-DOS. But as Microsoft became more prominent and IBM less so, the old "Nobody eer got fired for buying IBM" became "Nobody ever got fired for buying Microsoft".  There were a few attempts to use OS/2 in kiosks and ATMs, but I think by now the people who went that route have all been fired.

I think a lot of why Microsoft has held on so long in places where it's not really that good an option is because corporations like a "neck to choke" when things go wrong and there's nothing like a Fortune Company for a good neck. Granted, Linux has had a few major vendors, but management likes simple choices, so if you have a Soviet-style option of one vendor or a confusion of Red Hat, Canonical, and SuSe, for example, Windows, having already been familiar from everyone's desktop won out.

Of course now IBM owns Red Hat, but these days that's more a case of Red Hat improving IBM's presence and image than the other way around.

posted 1 year ago
Hmm .. ChromeOS-based kiosks crash as well - this one looks like a ASUS Chromebox

At Richmond Centre - Richmond, BC