Sybex Appendix A page 564 - Error in answer to question 17

posted 3 weeks ago
A correct answer for question 17 should be D. The import for is missing...

Am I missing something?

Posts: 3705
38
posted 3 weeks ago
I don't have the book, but I assume your concern is missing imports?
On the exam imports are usually implied and should not be considered as compilation errors.

Mikalai Zaikin wrote:I don't have the book, but I assume your concern is missing imports?
On the exam imports are usually implied and should not be considered as compilation errors.

I can share a screenshot of the Oreilly material, if that's allowed... is it allowed?

posted 3 weeks ago
Yes, that's "fair use" of copyrighted material in this case.

Paul Clapham wrote:Yes, that's "fair use" of copyrighted material in this case. 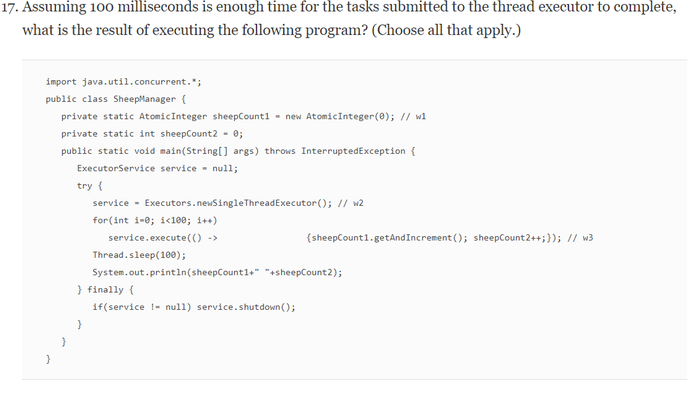 Which in Java means to import each and every class in the package java.util.concurrent (but not in any sub-packages if any exist).

As imports do not include sub-packages, no reference can be made to AtomicInteger without (1) an import of:


(3) or fully qualifying references to it as:

which is rather a mouthful.

The book is published by Sybex, not O'Reilly, but I don't disagree about anything else.
Jesse Silverman
Ranch Foreman
Posts: 343
8
posted 2 weeks ago
In general, when they show you a simple code fragment, you are often expected to presume the appropriate import statements are present but omitted from the fragment.

A nice clue they often provide is that line numbers begin with say, 3 or 5 or 6 or 8 or something...

If they show for instance, a package declaration, or any imports, that question is presumably showing you "all the code" and it is reasonable to presume you are supposed to notice the missing import.

In this case, going as far as showing you one import statement, I believe this is intended to represent a full class definition with all provided imports, in the default (unnamed) package, making your complaint correct.
Angel Daniel Alonso Tovar
Greenhorn
Posts: 4
I like...

posted 22 hours ago
Correct... That's why my concern with the answers...

I mentioned O'reilly because I'm studying the book in that platform.

Please let me know what else should I do to get that added to the errata.

Jesse Silverman
Ranch Foreman
Posts: 343
8
posted 18 hours ago
Likely when either of the authors gets up enough time, they will pop in here and "batch process" threads here relating to their books.

Sometimes we go off on tangents or give confusing advice, however, normally I think the regular folk around here do a pretty good job of welcoming errata posters, and confirming or denying their suspicions / agreeing or disagreeing whether we think something should count as an actual error.

So you probably don't need to do anything further but hurry up and wait.  In the meantime, according to the clues I gave I would definitely consider that an error.  They show at least one import, and a common mistake beginners make is to think importing a package imports its sub-packages.  It does not, or there is no such thing as sub-packages, depending on who you talk to.