Posts: 73257
332
posted 3 weeks ago
I don't think the caterpillar was too pleased about dying like this. I think I know what is going on, but I have never seen it before in real life death.
DyingCaterpillar2x.jpg

posted 3 weeks ago
The fire ant is the scourge of the Southern USA. Originally from Argentina, it made its way up through Mexico, into Texas and from there around the Gulf of Mexico into Florida.

If you'd ever felt their bite, you'd know where the name comes from.

Having no natural predators in its new home, it took over much of the South. But in recent years, researchers have experimented with importing its natural enemies. Something that we've learned to do very carefully these days.

It's a small wasp and the mere appearance in the sky makes fire ants run for cover. Which obviously reduces their productivity. But the worst is what happens to the luckless ant who doesn't escape.

The wasp lays an egg in the ant's head, which develops into a larva. The larva proceeds to basically hollow out the ant's head from the inside until finally the head simply drops off.

Insects have a whole raft of uniquely horrible ways to prey upon each other.

Science is the process of replacing what we "know" with what is TRUE. Politics, alas, often prefers to be the opposite.

Posts: 73257
332
posted 3 weeks ago
Within a couple of hours, the little grubs had hidden themselves in silk cocoons. It is too dark to get another photo now.

Posts: 73257
332
posted 3 weeks ago
I have found this FB page with more information: webpage. It tells you the kind of wasp and the kind of butterfly: Pieris brassicae = large white, one of our commonest butterflies. I think I have the same kind of caterpillar.

Here is video to make you vomit.

Posts: 73257
332
posted 3 weeks ago
I think I saw the same video on Permies and it didn't make me vomit. It did explain what the caterpillar is doing now; somehow, presumably via some sort of hormone, the wasps have persuaded the caterpillar to spend its last days guarding them. The last photo shows it head down, so it is moving and isn't actually dead yet.
DyingCaterpillar2021-07-04x.jpg

Posts: 73257
332
posted 1 week ago
Prof  Hans Smid's website. Vimeo page with same video on. Scroll down to third video. As Bunbury suggests, only suitable for people with a strong stomach. After the emergence of the wasp grubs, the video runs faster than in real life.
* * * * * * * * * * * *
The wasps have fledged and flown the nest. The photo was taken on Wednesday. I believe the little critters are called Cotesia glomerata.
Also posted on Permies 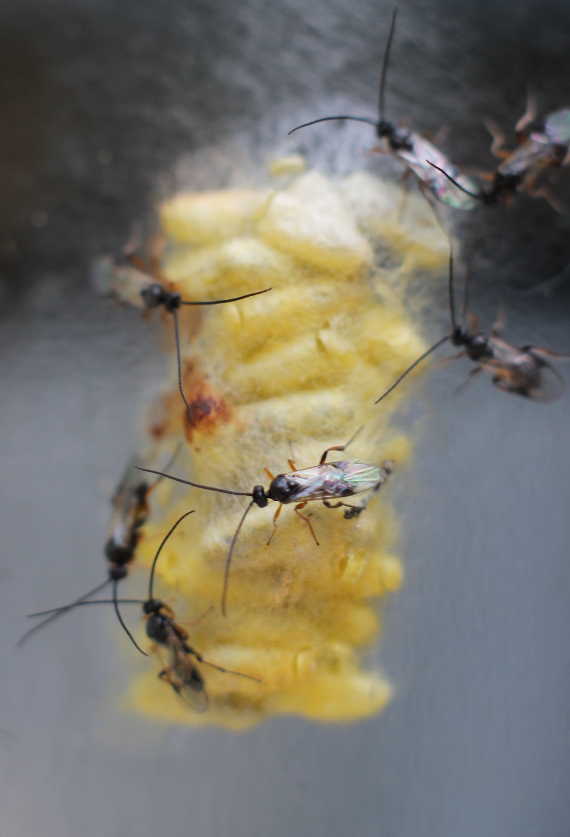