sai rama krishna
Ranch Hand
Posts: 599
1
posted 1 month ago
I am thinking to execute simple spring application. I see my old eclipse not working and workspace everything is wiped out. Which IDE with built in tomcat and database you recommend using quickly. If i try to set up eclipse then tomcat then database separately taking time and encountering issues Where you store project source code to refer back after say 2 years.
Al Hobbs
Bartender

posted 1 month ago
spring boot web starters will have tomcat embedded in the application.  Easy and no need to worry about the servlet container.
Tim Cooke
Marshal

posted 1 month ago
I would not recommend coupling your project to your IDE. Your IDE is a tool to modify your project more efficiently than you would with a basic text editor, but your IDE should not become a dependency of your project.

The answer to your question of "Which IDE do you recommend?" is to use whatever IDE you like the most and are most proficient in using.

Tim Driven Development | Test until the fear goes away

sai rama krishna
Ranch Hand
Posts: 599
1
posted 1 month ago
That makes sense. Importing into same type of IDE easy as previous version of IDE crashed with ever changing versions of underlying softwares etc. Hope spending day or two to bring everything up is only solution rather than expectation of having everything up and running in minutes or hours
Tim Holloway
Saloon Keeper

posted 1 month ago
I know of no IDE that has Tomcat built in, much less any particular brand of database.

IDE's use plugins to run a separately-installed Tomcat. The Eclipse JEE edition has a pre-installed plugin (WTP), but I've always despised it and I'm using the Eclipse Tomcat Plugin from the Eclipse Marketplace myself.

There are also plugins to talk to databases from IDEs, although I do OK without them using the regular database console apps.

Spring Boot is an execution framework, though, not an IDE.

sai rama krishna
Ranch Hand
Posts: 599
1
posted 1 month ago
I also tried eclipse market place tomcat to avoid compatibility issues. It showed tomcat 9.1.14 (for latest eclipse i downloaded yesterday) which i downloaded but did not install automatically. I checked in eclipse plugin directory below but could not see tomcat there as well to browse to add
C:\Users\gp\eclipse\jee-2021-09\eclipse\plugins 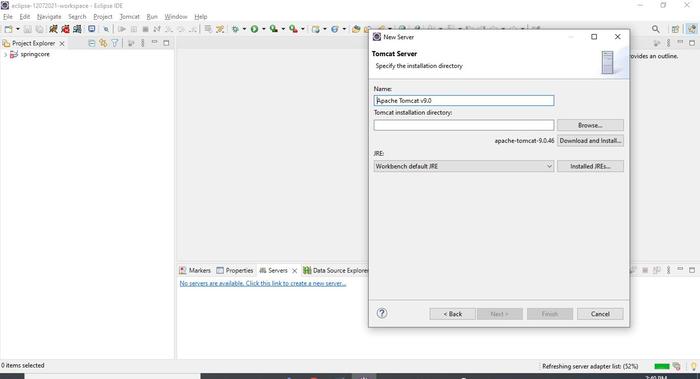 sai rama krishna
Ranch Hand
Posts: 599
1
posted 1 month ago
Eclipse suggested attached 9 version and 10 version to download and install. These version different from eclipse market place. Too many versions to keep up with.
eclipse_tomcat_5.JPG

posted 1 month ago
The Tomcat plugins do not include Tomcat. You have to download and install Tomcat from tomcat.apache.org. Easy enough to do, since Tomcat is a ZIP file and all you have to do is unzip it and point the plugin at the directory it unzipped to using that first dialog.

You actually have the option to install and run multiple versions of Tomcat at the same time, but unless you are an especially evil person (like me) you won't usually do that. It does help when you start migrating between Tomcat versions, though.

sai rama krishna
Ranch Hand
Posts: 599
1
posted 1 month ago
When I selected 10.0.10 it is asking for source directory of downloaded tomcat 10.0.10. I tried downloading from here bug could not find zip file of it though
https://archive.apache.org/dist/tomcat/tomcat-10/v10.0.10/
Only Exe file there. Somehow exe file prevents from installing other versions of tomcat in future right. Bring up development environment and keeping it up is bit challenge unless daily work on same laptop everyday

posted 1 month ago
Ah, I forgot that the latest version of the plugin can download Tomcat for you. But you still have to push the "download" button and make sure that the plugin dialog installed Tomcat.

posted 1 month ago
Don't bother with the Tomcat source directory. What you want is in the bin directory.

The traditional way to get Tomcat for me would be via this site: https://tomcat.apache.org/download-10.cgi and I would download one of the core versions. Windows-specific versions may include installing as a Windows Service, but the ZIP versions work too. The tarballs (tar.gz) are common for Unix-like systems, although some Windows ZIP programs can read them also.

sai rama krishna
Ranch Hand
Posts: 599
1
posted 1 month ago
I was not sure which action above downloaded tomcat 10.0.10 for me. I am able to now attach to eclipse and start it after i change port from 8080 to 8999
tomcatDownloaded.JPG

Jim Whitaker
Greenhorn
Posts: 26
posted 1 month ago
Don't use Tomcat, use Tomee.  You then have CDI also.
Apache has an article of how to put tomee in eclipse.  But I like netbeans.
sai rama krishna
Ranch Hand
Posts: 599
1
posted 1 month ago
Interesting. I never heard about tomee. i will check. Thank you Jim and Tim