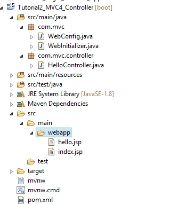 Have you added some debugging statements to see if your controller method is being called?

My guess is that it's a problem with the view name you're supplying. I believe the default ViewResolver is a InternalResourceViewResolver. I think you therefore want to be returning a view name of "hello", rather than "hello.jsp".
show more
5 years ago
Spring
Controller-Service-Repository: Should Repositories depend on other Repositories?
Let's say we have a couple of classes; Brand and Supplier, where Supplier is a property of Brand.

Within an a JDBC implementation of BrandRepository, we implement this method: public Brand find(int brandId). Within this method we retrieve brand.supplier_id within the SQL query, and we wish- somehow- to use it to set the Supplier property on the Brand object. The most obvious way to do this is to inject a SupplierRepository into the BrandRepository implementation, and just call public Supplier find(int supplierId) on that.

Do you have strong objections to this? If so, could you outline a preferable alternative?

I'm less interested in the specifics of this example than I am the general principle of whether it's ever okay for a Repository to depend on another.

Many thanks.
show more
5 years ago
Spring
How to test a Controller, specifying a Tiles ViewResolver?
Just in case anyone comes across this issue in future: I needed to add ...and the name of the class to be passed to the @SpringApplicationConfiguration was that of the Spring Boot Application e.g.

show more
5 years ago
Spring
How to test a Controller, specifying a Tiles ViewResolver?
Hi,

This is a pretty basic issue, but after Googling and trying various things I have had no success.

I have a Spring Boot app with three Java configuration classes (listed in the code below).As you can see from my failed attempt, I'm simply trying to test that a specific view name is returned, at this stage. What I haven't been able to do is configure the test so that it uses my existing ViewResolver. I've seen examples that create a new ViewResolver in the setup method, but... DRY.

How should I be going about this?

show more
6 years ago
Beginning Java
stack implementation using a linked list for reverse polish notation
I have a few suggestions, but the most important point is the one Stephan has already made: you do not want to iterate the stack.

Firstly, unless you have been explicitly told to name it as such, "Program1" is a terrible name for a class. There's actually no need to have separate class just to kick off the program, in my opinion: Stick the main method in your ReversePolish class. (A better name might be RPNCalculator.)

How about defining an interface for a Stack, and having another class, LinkedStack, that implements that interface? That way you can code against an interface rather than an implementation. (As Campbell suggested, you should make these generic types: e.g. Stack<E>. If you haven't covered generics yet, though, don't worry about using type parameters.) For bonus points, list the pre- and post-conditions, return types (and, if you're comfortable with them, exceptions) for each of the interface methods. Doing this will help you better understand Stack's methods, and why they should have the return types they do. e.g. for push(E obj), you could have:

LinkedStack then implements Stack (or, if using generics: LinkedStack<E> implements Stack<E>), and should have a private member variable of type Node (or Node<E>), representing the top of the stack (thus you could call it top). If you wanted to type-parameterise your Node class, instead of having

This generic version is far more reusable, as it is type-parameterised: it can objects of any type, not just Strings.

Rather than just using a String array of operators, why not use an enum? Here's a partial sample of what it might look like:

That way, in your RPNCalculator class, you can say:

Your ReversePolish class (which, again, I'd rename to RPNCalculator for better descriptiveness) is overly simple. Bear in mind that you want to handle ints and operators very differently: With ints you simply want to pop them on to the stack, with operators, you want to pop the next two items off the stack and apply the operator to them. So, how about a couple of methods: public void handleInt(int i) and public void handleOperator(Operator op)?

I don't want to give you too much help on this, but hopefully I've given you some ideas to move you forward. I think you're still a wee bit away from a decent solution, though, so feel free to ask further questions.
show more
6 years ago
Beginning Java
unreachable code

In order for a variable to be effectively final, the compiler needs to know that the variable is isn't reassigned a value after it's initialised.

You've misspelled "scanner" in your import statement.
You're not using any of the variables you declare.
You're using a variable you don't declare (tall).
You're trying to break out of a loop using a label, but you haven't created the label. You're not actually in a loop, though, so there's no need to break here.
show more
6 years ago
Beginning Java
program for calculating electricity usage.
Agreed: NotePad++ is an excellent choice. It's free, you get syntax highlighting (for numerous languages), and you avoid the learning overheads of an IDE when you're just starting out.
show more
6 years ago
Beginning Java