Failed to populate Java object from JSON?
Have you logged the value of response after your calls to replace?

And then I suggest just trying to get that to work, with no other stuff around it.
A simple test bit of code, with a fixed json String based off that value.

The advantage there is that you can then post it here if it doesn't work and we can see and/or test using the same data and code.
show more
1 day ago
Web Services

Can you identify this bright spec ?

Campbell Ritchie wrote:Doesn't work. I have tried it. You need a rotating mount as used for telescopes, aligned with the earth's rotation, otherwise the image will be smeared by the earth's rotation. There is a name for that sort of mount, something like azimuthal mount, but I am not sure. You can't use short exposures because the object photographed will be too faint to appear.

It does work, but it's not a single shot.

What you do is take several shots, using shorter exposures than you would think (about a 5th of a second for Saturn, much less for Jupiter).
There's software to handle overlaying the best of these to get rather nice piccies.
show more
1 day ago
Meaningless Drivel
Accessing a value from the application.properties
OK.
And have you debugged and logged the apiKey value in both cases?
show more
2 days ago
Spring

Having trouble with method producing unexpected output.
Spoilsport.
I was hoping Perry would figure that out once he saw the output.

Having trouble with method producing unexpected output.
An array is an object, and so (since it doesn't have its own toString method) inherits toString from Object, whose output is what you see. The class name followed by its hashcode.

Since you want a meaningful String to print out there is a method on the Arrays utility class (called toString) you can use.

You will then find (I think) that the last entry in your returned array is 0.
I'll leave that to you to figure out.
show more
2 days ago
Beginning Java
Accessing a value from the application.properties
So, if you use that api key directly (not injecting it) does it work?
show more
2 days ago
Spring
Date Formating With Year

Steve Dyke wrote:
I am trying a different date/time library: java.time, I have to use a back ported version since I am still using v1.7.
However, I am still having issues.

It's nothing to do with that, though.
It's entirely to do with not using the same format for your parser as the date you are attempting to parse.
show more
3 days ago
Java in General
Date Formating With Year

Java does it's best, but they are not the same format.
It parsed the first two items as month and year, so 04/08.
show more
4 days ago
Java in General
Date Formating With Year
Actually, scratch that.
I'm getting confused by your debugging.
You have printed out the before, but not the after.

Log (not rely on code somewhere else) what the value of mfgDateFormatOverride and mfgDate is as part of the code you posted.

I also note your brackets don't match up, which makes reading that code really awkward.

I would hope this piece of code is not part of a single massive method, and is itself a method you can at least attempt to test.

By the way, I think this is the part that's not doing what you expect:


Your format is (apparently) MM-yyyy, and you are trying to parse 04/08/2020.
I think.
show more
4 days ago
Java in General
Date Formating With Year
You are not showing us where you are doing the formatting and on what data.
You are simply showing us the output.
We know the output is not what you want, but we cannot see how you are getting that output to point out where your error lies.
show more
4 days ago
Java in General
You have an error in your SQL syntax; check the manual that corresponds to your MySQL server version

Yosuf Ibrahim wrote:. . . I am afraid of the database being messed up so any error I get the database to close

No, you are only closing the database if an exception is thrown. You need to close the connection regardless.

Depends on the environment.
If it's a desktop app then it's reasonable to only have a single connection, in which case you wouldn't necessarily want to close it.

Obviously, if it's a connection pooled environment then you would, as you say, always want to close it (ie return it back to the pool).
show more
4 days ago
JDBC and Relational Databases

How to extend the Paint class
It's a package private method.
Looking at the source code Paint is not intended to be extended other than by things in the javafx.scene.paint package. The only constructor is a no parameters one, which is also package private.
show more
5 days ago
JavaFX
java error Before start of result set


This while loop does nothing due to your typo at the end there.
Remove the semi-colon.

As things stand this loops until there are no records, and then you go into the next couple of lines where you then try and print out the non-existent record.
show more
5 days ago
JDBC and Relational Databases 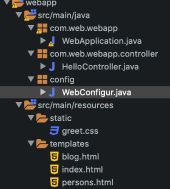 Can not understand why I can't login?
Look at the end of line 10.
show more
2 weeks ago
Spring
Null Pointer Exception
I think you missed the bit where I said to point out where in your code it is thrown from.

Your Controller has no line 77.
show more
2 weeks ago
Spring