Are they going to skip the Beta phase for this particular test?
show more
7 years ago
Programmer Certification (OCPJP)
Scores for 1Z1-810 Upgrade to Java SE 8 beta exam are available
I had the same status on another beta exam I took. Mine took about 2 days to go from TAKEN to PASS. Maybe they start uploading results, but they're not updated until all results are updated? Normally when I take a regular exam I get result right away.
show more
7 years ago
Programmer Certification (OCPJP)
OCMJEA part I - mocks
Getulio,

Everyone is different, but at least when I took part I, I felt that the test was a bit harder than the Whizlabs simulator. I even think I scored lower on the real test than on my last runs on the simulator. On other Oracle tests I've taken it has normally been the opposite. The OCMJEA test has some very subjective questions, which make it harder in my opinion. When I did the test there was no book for the version 6 of the test, but if there had been one, I probably would have read it cover to cover.

Andres
show more
7 years ago
Architect Certification (OCMJEA)
Passed the Oracle WebLogic Server12c: Advanced Administration II beta (1Z1-134) !!
It was close (65%, needed 61%), but I'm still happy since it was a really difficult test, and being a beta test, there's very little material to prepare with.

If anyone is interested, I made blog post with my notes. Hopefully someone will find them useful to prepare for the production test (1Z0-134).

It sure feels good to be one of the first WebLogic Server 12c Administration OCPs.
show more
7 years ago
Certification Results
Hardware choice query
It's up to you to justify your hardware profile. In my solution I did justify some special aspects of the profile that would allow me to achieve my NFRs. Other than that I went with pretty conventional server hardware.

The minimum requirements for Apache HTTPD are quite low, as mentioned. However, I would say it's safe to go with a "standard" business level server even if it's going to be underutilized.
show more
7 years ago
Architect Certification (OCMJEA)
Mandatory trainning
Yogindar,

Yes, on training on demand (TOD) do count, and are an inexpensive option. They're are also good because you don't need to take time off from work and get to the training center, which can be a significant expense.

The ones that do not count are the self-study CD and online courses. Unfortunately, anything else not offered by Oracle doesn't count either.

As for taking "Java EE 7: New Features" I do not know if they will let you take the course without the prerequisite.

Andres
show more
7 years ago
Architect Certification (OCMJEA)
mandatory use of EJB components in assignment part
Using EJBs is not required. If you try to shoehorn EJBs into a problem that doesn't require it, it might even backfire on you. If you only need to MDB (which is after all a type EJB), that is also fine. You can wire everything in your app using something else (like CDI), and just have a few MDBs. You won't be able to use the Java EE Web Profile, so will have to take into account using a full Java EE platform.

Andres
show more
7 years ago
Architect Certification (OCMJEA)
1z0-866 Essay Questions
It's ok to practice writing a bit, to get your ideas in order. I would just recommend reading all of the questions in the test before writing a single word. You will find that an issue that could be addressed in an earlier question, should be better addressed in a later question. In this test, time management is key, and you don't want to waste time typing over and over the same information.
show more
7 years ago
Architect Certification (OCMJEA)
Cache
There's nothing wrong with using a cache server per se. I would just make sure that you justify the added complexity. Do you have a situation in which normal session replication wouldn't be suitable? If yes, then document that, and use your cache server to solve the problem.
I think the same with regards to mentioning Redis, if there something in particular in Redis that will help you solve the problem as opposed to something like HazelCast or Coherence? Then document that.
Otherwise it might seem like a "Golden Hammer": I know Redis, so I'm going to use Redis regardless of requirements.
I did mention a couple of very particular piece of software, to solve a critical part of the problem. In my solution I even had a whole section justifying that.
show more
7 years ago
Architect Certification (OCMJEA)
My study notes for "Oracle WebLogic Server 12c: Advanced Administrator II" (1z0-134)
German, you can access it here:

Something seems to have happened to my other domain.
show more
7 years ago
BEA/Weblogic 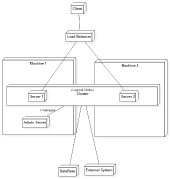 Deployment Diagram and Clusters
1) I would say with 100% confidence that the manageability is a NFR. Does it apply to you? That depends on your scenario. (I'm assuming you're talking about a Weblogic domain in this case, but I might be wrong) Can you get away without having an admin server? Actually I think you can, I have never done it, but I've read of people that move the config.xml manually from a staging environment to their production environment, and don't have an admin server in production. Of course they also have figured out other ways monitoring and troubleshooting the cluster without the admin server. Either way, I think it's worth addressing the NFR of manageability. The admin server is one way.

2) What you're saying makes sense. And it all goes back to your assumptions. Are you relying on a DBA team? If you assume so, then it's easier to treat the DB as a black box. Are you assuming that your the only technical person in this fictional company? Then you're on the hook for dealing with the database stack (hardware / software / etc). Both cases are valid in the real world (I've had to deal with both). In this case, you make some assumptions and focus on the core of the assignment, which is Java EE architecture. In my opinion, for the assignment, going into great detail about the database is not required (unless your architecture depends on some special DB feature or setup).

At the end of the day, the idea is to have something that someone can pick up and understand.

1) Well... that depends, are the node managers significant for your architecture? For example, if you were sending emails, then the SMTP server should be shown somewhere in the component diagram. Will the node managers help you achieve a functional requirement or a NFR? If yes, then add it. If not, then you can skip it.

2) The same thing would apply to the Oracle RAC. Is any of those subsystems vital to your architecture? Are you doing anything esoteric with it? Otherwise you can treat it as a black box. This how Oracle expects clients to access the RAC, as a single black box, not hitting directly any of the underlying pieces. However, if you have some special communication going on to figure out which nodes are up, synchronization status, then it might be worth detailing those specific resources. I'm on the

My answers are mostly my opinion, but hopefully they will help:

1) The Cluster could be a component (using the component 3d box widget). In the component you would have the machines, and inside the machines you have your app servers. Conceptually correct? May not 100% UML compliant 100%? No idea. But it would help show how it works. You could do something non compliant, like use a dotted box to represent what's part of your cluster. As long as it conveys the clear intention, I would say it's correct.

You could have only the app servers inside the cluster, but from an UML kind of way, it's weird, because of overlapping boundaries. Is the machine part of cluster? Not exactly, but the cluster can't exist outside of some machines. This arises from trying to mix two a "logical" deployment and the "physical" deployment into a single diagram. I would still keep it to a single diagram, but understand that you're mixing somewhat separate concerns.

2) It depends, actually each server connects to the database. It's not the "cluster". However, in terms of the diagram, I find your sample pretty evident in what it tries to convey.
3) Yes, I did show it. It's important to show it. In one of the node machines? In a separate machine? Well, look at your NFRs to see what's more appropriate, but I don't think either one is really wrong.

Andres
show more
7 years ago
Architect Certification (OCMJEA)
Machine costs
That is probably overkill. If you already have come up the info, I don't think it will hurt to add it as an addendum. I didn't go into that level of detail.
show more
7 years ago
Architect Certification (OCMJEA)
My study notes for "Oracle WebLogic Server 12c: Advanced Administrator II" (1z0-134)
I have just published my study notes and experience taking the test 1z1-134 ( the beta exam for 1z0-134).

You can read them here.

Maybe someone here would find these useful.
show more
7 years ago
BEA/Weblogic