You're preaching to the choir

I'm guessing you're kidding, but you bring up a good point.

There are good moments in a book to show examples of how to properly comment your code. But for most of a good book, side annotations are a better teaching approach than things like JavaDocs.
show more
8 months ago
Meaningless Drivel
Teach Java in 5-10 pages ?
Hi Guys,

Imagine you want to teach some early intermediate programmers - in as few pages as possible - some basic, useful Java. Maybe a person who already knows some Python or some Swift, or Go, or C#.

My thought is that you could show a page of code that demonstrates the use of a lot of key language and API features. You would annotate the code, and maybe on subsequent pages zoom in on certain lines of code and explain them more carefully. But the idea is that all you get is 5-10 pages total. You might also include a diagram or two.

Here's a rough spec for a small program that might cover a lot of bases:

- Write a program that takes command line arguments.
- If the first argument is "sort" or "-sort", you will sort the subsequent arguments by natural (alphabetic) ordering.
- You'll write the (if appropriate, "sorted") arguments to a text file, and display the average length of the arguments.
- You should make an instance of the class, and show as many reasonable, commonly used language features as you can. Don't go overboard!
- FWIW, I used an ArrayList.

I've attached two pages from one of our Java certification books. This code doesn't do as much as I'm proposing, but it might give you an idea of how the 5-10 pages might end up looking.

show more
8 months ago
Meaningless Drivel
Should we expect any of the OCA objectives in the OCP java 8 exam ?
Campbell !

What's with those opening curly braces being all alone on their own line?

Actually it's only sort of a joke, I'm pretty sure that on  the real exam, opening curly braces will be at the end of the previous line.

And - at the risk of starting a war - I think that's where they should go. ;)
show more
1 year ago
Programmer Certification (OCPJP)
Should we expect any of the OCA objectives in the OCP java 8 exam ?
It's a really good question.

But in the end, I don't think there's any way around the fact that while you're taking the exam, you have to read the code. What I will say is that for most candidates, there is plenty of time during the exam.
show more
1 year ago
Programmer Certification (OCPJP) 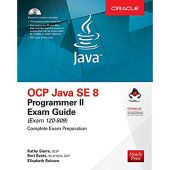 And thanks to everyone who participated this week, there were a lot of great questions!
show more
1 year ago
Programmer Certification (OCPJP)
OCP Java SE 8 Programmer II Exam Study Guide: OCP 7 to 8 upgrade considerations
It's a good idea. I would say that we do it occasionally, but not reliably. Sorry about that, we'll think about that for next time.

That said, we printed out both sets of objectives and referred to them constantly and cross referenced them. I recommend that all candidates become VERY familiar with the objectives, they're only a few pages.
show more
1 year ago
Programmer Certification (OCPJP)
OCP Java SE 8 Programmer II Exam Study Guide: Kindle Issues?
Not sure if this helps, but the book comes with a CD (remember CDs?). The CD contains practice questions and also all of the chapters in .pdf format.
show more
1 year ago
Programmer Certification (OCPJP)
OCP Java Study Guide question
We were fortunate to work with both Sun and Oracle in the creation of many of the Java certification exams. So we have a very, very clear sense of the nature of the questions on the real exam. We try to match the real exam as closely as we can and then we add an extra level of difficulty by usually not telling you how many answers are correct. We hope that our questions are mostly a little bit harder than the ones on the real exam.
show more
1 year ago
Programmer Certification (OCPJP)
What is the next version of the OCP Java exam ?
Hi Ahmed,

We're in touch with the certification folks at Oracle, and when we have news, we'll share it on JavaRanch first!

show more
2 years ago
Programmer Certification (OCPJP)
Will K&B OCP book be useful for upgrade exam?
for sure it covers everything you need to go from either java6 or java7. but be aware - if all you're doing is upgrading, you won't need to real all the chapters you bought.

show more
2 years ago
Programmer Certification (OCPJP)
Java 8 Cert book
I think it really various from locale to locale. My general sense is that a certification can help if you don't have a lot of on-the-job experience and it can also be a tie-breaker when two job candidates have similar CVs.

And, we really believe that studying for, and passing the exam will make you a better programmer. That way, once you get a job, you'll do better at it.

show more
2 years ago
Programmer Certification (OCPJP)
OCP Java SE 8 Programmer II Exam Study Guide: Why Buy?
The leading prep books each have their own style of writing and presenting the material. Some of the guides take a more academic style. Some of the guides are very concise. We try to teach all of the topics from several different angles, we use a friendly, non-academic writing style, and (as you can tell from the book's 900 page length), we're not too concerned about being concise. We're also not above sprinkling our writing with some easter eggs and lame jokes.

Some readers like our style, some prefer other approaches.
show more
2 years ago
Programmer Certification (OCPJP)
OCP Java SE 8 Programmer II Exam Study Guide: Kindle Issues?
I wish we had better news for you. We really designed the book's pages for the print edition. In general we think that formats like epub currently make it virtually impossible to do a good job creating technical training material. These formats are meant for novels

So we focused all of our energies on the print edition, and I'd predict you won't be too happy trying to study from this book on your kindle. we're sorry!
show more
2 years ago
Programmer Certification (OCPJP)
OCP Java SE 8 Programmer II Exam Study Guide
Hi Paul,

Every candidate should go to the Oracle site and download or print a copy of the exam objectives. Any good certification book will focus mostly on those portions of Java included in the official exam objectives. Our book is pretty big, about 900 pages, and the whole book is devoted only to the exam's objectives. That said, we try to zoom out a little bit and cover about 115% of what we think is really on the exam. We try to give a slightly broader context for the topics while primarily being focused on the exam objectives. For example, there is nothing about J2EE in the objectives, and so we don't mention any aspect of J2EE in the book.
show more
2 years ago
Programmer Certification (OCPJP)