Simplifying classes that are very similar
I would like to offer my two cents on the no-args constructor.  These have been disdained in recent years because of the issues pointed out recently of making invalid instances.  They would also tend  to make instances that are not thread safe.  That's partly because the creational thread could be part-way through completing the instance' data when the instance is used by another thread, but also because you can never be sure if the completed instance might get changed by one thread while another is using it.

One alternative offered is an "all-args" constructor, which I think you mentioned.  That's a term used in the Lombok framework.  That is fine, but at a certain point you can get an unwieldy number of arguments, or you can end up with multiple "many-arg" constructors (as the OP mentioned).  There is an excellent discussion of this in Bloch's "Effective Java".   What Bloch suggests is that above a certain number (4?), you employ a Builder pattern.  That one has a builder supplying the created object (which can have an all-args constructor with appropriate defaulting for variations you might run into).  This builder is responsible for having setters (which don't have to be called set*) for any parameter you might want, as well as doing validation before returning your completed object from a "build()" method at the end.  This is usually done with a fluent coding style.  He also mentions the use of static factory methods, which can return an instance of an interface, so that for things like testing (maybe) you could return a different implementation.  Under other circumstances, you could return the same object multiple times, etc.

That said, if you are going to be making objects with some kind of automated tooling (you mentioned introspection and newInstance) doing the classic "bean" pattern with no-args + many setters might be just fine.  If you setup packages just right, you might even be able to avoid having anything with access for changing it once it has been populated.  Bean pattern is how many of the older frameworks do it.  It is what Java Beans were initially intended for.

This part the OP mentioned about

I couldn't simply throw a list of values at the class definition and get what I wanted. I had to scan the entire list of available constructors and match the values supplied to the constructor argument lists to see which constructor to invoke.


is something Bloch also describes in his book.  It is what I alluded to above--variations in the arguments needed to make a complete object.  His solution was multiple different factory methods with names like "of(arg1,arg2)" or "of(arg3,arg4)", and each of those is responsible for completing and returning a validated object.  Builder could still work for that as well.  Different names for factory methods specific to the situation could be chosen as well.

I hope that helps

show more
6 months ago
Java in General
How To: Figure out What is Requiring a Module
Just replying to Mr. Van Hulst,

As I said, I wanted to learn about tools here.  Thank you
show more
10 months ago
Jigsaw and Modules
How To: Figure out What is Requiring a Module
I found a way to answer my own question.  Not sure if there may be a better way out there, but here goes.


Even though there are still issues in the project, these dependencies are still spelled out.  Still have to read it, though ;-)

So, when I see gradle claiming

Or any other module, is there some tool I can use that will tell me what code has that dependency?   Yes, I have seen that jakarta.activation is supposed to have replaced this as of long ago.  I have that dependency in place.

show more
10 months ago
Jigsaw and Modules
Interview question doubt
I see some great posts pointing out interesting things about the example code.

Interesting question in some ways.  If I were asked "how I would optimize it", and I don't guarantee this would win points, I think I would reply that I would paste the code into an IDE, run it a million times, and see how long it actually takes.  Then I would possibly profile it (although this is pretty small) to see where the time is going, and one fix I would consider changing would be the concatenation argument (+) to using of StringBuilder.append().  I say "consider" because there may be some JVM optimizations by this point that handle underlying use of String Builder.  After any such change, run it a million times again and time it.  Multiplying runs like that is a good way to force differences to emerge even if they were fairly small to begin with.  As has been pointed out, this code will not do anything.  As such it will run pretty fast.

UML
What is it you need help with?  Please elaborate.

It is always best to work through problems yourself.  Perhaps what you asked for help with was the "implement your code here" blocks?  If so, think about what the methods are named, and of course the (apparently) requirements list.  Consider how you would make those things happen using Java.  This really is where the fun begins.  You could create something at this point.  Along the way, remember you can always print out the states of things using code like this.   This is an example of how to dump room contents, assuming a room has been declared and has data in it.

One hint I would give: those "toString()" methods have been commented out.    takes code "out of commission".  Removing those from around the code will allow it to be executed again.

Have fun!
show more
11 months ago
Java in General
Using Static Methods
Having seen this and scanned some of the discussion, I want to raise a few points.  Firstly, it has been gospel in OO going back to early days that "static methods are bad".  However, when the designers of Java got their opportunity, they did leave them in.  I have long held that belief because static methods tend to not only bypass the whole encapsulated data notion, but they also stick you with only a single copy of something.  Having multiple instances of a class with different state is one of the things that drew me to OO that long ago.   Static methods also require class members rather than object fields.  Further, if you want to setup the state of a class that has all static methods, it either all has to be in constants or the static members have to be mutable.  Hence, it would discourage immutability.  And on a basic level, without an object, it is as if you are still doing Procedural code.  Why waste time compiling Java at all?

That being said, there are exceptions that are encouraged by industry experts.  In particular, Joshua Bloch's "Effective Java" encourages the use of static methods as a means of improving how objects are created.  Instead of directly hitting the constructor, you use a static method to get an instance.  This comes with it a host of advantages, such as the ability to constrain the number of instances to just a few (sort of like making a "multiple-ton").  It allows one to enforce a builder pattern by making the constructor itself private--which in turn allows one to make an immutable object even when all parameters may not be available at one time.  Further, with a constructor you get only one name -- same as the class.  Using a static method to construct (factory method, actually) you can give a more meaningful name to a constructor to be used for a specific type of configuring of the object.

I have also seen some rather convincing arguments that a static method is acceptable if it does something general to something that is related to a class, but is not using any of the class's state to do so.  Suppose you had a "Person" class, but you wanted to have a method that properly capitalizes person names?  One could argue that the Person class would be a good place to put it, but that it might be leveraged by others.  But it could as easily be argued that "capitalize()" belongs in some utility class.

In summary, I think an ideal question here might have been about when it is advisable to use a static method.  Simply having asked, I suspect it is apparent to the OP that there is more to the discussion than "one is better than the other".
show more
11 months ago
Java in General
is it possible for a boss to provide too much feedback?
Awesome to have Ken Kousen on the forum.  I have seen him and heard about "Kousen IT" a few times.  That's witty.

I am curious: is it possible for a boss to provide too much feedback?

Thank you
show more
11 months ago
Jobs Discussion
Certification
Greetings, All.
I found a nice course on HDPCD certification.  When I say 'nice', I mean informative.  This teacher seems to have all the right information, but is not as slick as some instructors online.

Anyway, although I had never thought of taking HDPCD, I took the course to learn more.  However, the FAQ states that HDPCD is discontinued.

Will HDP exams continue to be delivered?

I think the course is still good info (like I said, I did not want to take the test anyway).

The course is "HDPCD:Spark using Scala" on Udemy.

You should take a look at the logic for the third function.  You seem to be expecting it to do a lot, but not giving it any relevant code to do so.  To get you going, you should:
1. Review == and the "equals(Object o)" method in Java.
2. Consider: how could the method ever return anything other than "true"?  You have the default at true, and then you never change the value to anything else.
3. Review some of the methods in java.lang.String.

I hope that helps.
show more
3 years ago
Java in General

javafx not working in Java 10
Hello, All.

While I am actually still struggling with a related issue (that is, I am no expert), I can tell you something pivotal to your understanding of this problem.

Java7 and Java8 included JavaFX in their JVM.  As of Java9, that was no longer the case.  Java9 through Java12 (+ assume) requires you to get JavaFX as a module and use that module.  If you are using Maven, you can get past this by including dependencies.  I think these should work.


However, the swing dependency may not be needed, and there are other dependencies to do with JavaFX that you may need, such as javafx-fxml and javafx-media.

I hope this helps someone.
show more
3 years ago
IntelliJ IDEA
Question to Sebastian Daschner
This is my question for the author of the new book: "Architecting Modern Java EE Applications".

Looks like hope for the future.  My question to you: what motivated you to take the time to write on this particular topic?  I have seen fewer organizations embrace this technology than in the past.   It is far from moribund in my view.  Are there certain developments in JavaEE 8 that really excite you and convince you this is an excellent approach to modern problem-solving? 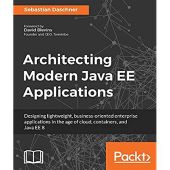 * Welcome Sebastian Daschner
Thanks for making this available.
show more
4 years ago
EJB and other Jakarta /Java EE Technologies