Comparison Between Spring Boot and Struts
Spring allows you to use dependency injection offering many benefits.
I sort of suspect that Spring Web (and other spring projects) have replaced Structs in most modern projects.
Do recall working with structs, and a few home grown "custom" frameworks that where sort of like structs but really antipatterns giving a bad smell

.
show more
1 month ago
Spring
From Which Version It is considered or called as Application Server
Not sure you're asking the right question;

So it might depend upon what people mean by an "application server", but I tend to follow the definitions above.
show more
3 months ago
Tomcat

Garden Master Course kickstarter
Just randomly found this; .
It's from the FT so has a financial emphasis.
show more
3 months ago
Meaningless Drivel
Freelance or Permanent work?
Yeah, I did some contract work for the National Health Service.
Transition project for their patient records system but always felt that the information was being evaluated for potential profit.
I'm actually leaving the UK contractor market, it's just not worth the hassle.
show more
5 months ago
Jobs Discussion
Freelance or Permanent work?
Since the recent tax changes (IR-35) there are no real benefits to working as a "freelance", or as we would say, a self-employed contractor in the UK.
In effect, you end up paying a lot of tax since the tax office treats you like a regular employee, but you don't get any employee benefits.

I am of course very biased (and angry

) since I've contracted for about fifteen years, often doing the work and hours that regular (we call them permie) employees don't or won't do.  Actually, it's causing a lot of problems, as systems are now failing due to staff leaving projects and companies are now struggling to find replacements.  The issue is that the UK government produced a report which highlighted the expected issues.  It was then debated in the House of Lords who then made various recommendations;


It is right that everyone should pay their fair share of tax. But the evidence that we heard over the course of our inquiry suggests that the IR35 rules— the government’s framework to tackle tax avoidance by those in ‘disguised employment’—have never worked satisfactorily, throughout the whole of their 20-year history. We therefore conclude that this framework is flawed......

It is likely that the off-payroll changes will cause widespread disruption. Many of our witnesses described how the proposals had already encouraged blanket status determinations and the early termination of contracts. We also heard that many contractors had been left in an undesirable ‘halfway house’: they do not enjoy the rights that come with employment, yet they are considered employees for tax purposes. In short, they are “zero-rights employees”. Separating employment status for tax purposes from employment status under employment law also fails to acknowledge that contractors bear all the risk for providing the workforce flexibility from which both parties benefit.

These recommendations were ignored by the House of Commons, and today we have a very strange situation;

“We have entered this bizarre situation when it makes sense not to work in your own country, and that’s a consequence of badly designed legislation,” 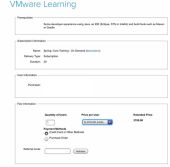 Spring Core Training (On Demand)
Oh - just thought I'll have a look into updating my old certification and (whack) they want me to attend another course before taking the exam.
I did pay for and attend an old course (about two grand), but not going to do that again!
Just a shame [IMHO] that VMWare [or Tanzu] has chosen to monetise this exam, disappointed, to be honest.
show more
5 months ago
Spring Certification
Which programming language you would bet on ?
Web Assembly -

Wasm is designed as a portable compilation target for programming languages, enabling deployment on the web for client and server applications.

So not really a programming language, more of a runtime environment for many of the current popular languages.
Here's a github list of Web Assembly Projects
show more
6 months ago
Meaningless Drivel
Who is still here from 10 years ago
Since 2004, however, more recently been a bit AWOL as I've been concentrating on learning blockchain stuff ;-)
Maybe long-timers should be issued proof of attendance POAP or something.
show more
6 months ago
Meaningless Drivel
Rust: Preferred IDE
Another vote for good old vim ;-)  Rust and web assembly are on my forever-expanding list of stuff to learn ;-)
show more
6 months ago
Other Languages
Carbon an experimental successor to C++ from Google
Google has just launched Carbon an experimental successor to C++ Carbon GitHub.

They also say that they help various charities.

show more
10 months ago
Books
open gui on a windows10 machine from debian over ssh
It's been a while, but often the easiest way is to run a Putty client on the local (windows) machine and then configure it to do the X forwarding.
X is the native window service that runs on most Linux machines.

You will also need some sort of X emulator installed on your Windows machine, Xming is one that I know of.

Took some doing as it felt like six months of study crammed into three months, and way too much JavaScript ;-)

Turns out Solidity the language used, is very much like C++, with good old multiple inheritance.   Also, it seemed that a low-level understanding of
the Ethereum virtual machine was required.  Shared a lot in common with firmware development, with a lot of security concerns.

I feel I've still got a lot to learn, bleeding-edge technology which is subject to rapid change.